"The Empty Manger" by Bill Crider 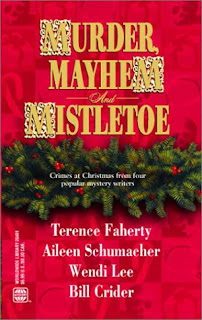 I have a love-hate relationship with Christmas. I love that I get a day off work. I love the stereotypical atmosphere of goodwill—I usually don’t see it, but I love the idea of it—the music (in small doses) and time spent with family and friends. And eggnog. Always eggnog.

The part of Christmas I don’t love so much are the crowds, both in stores and on the roads. The rush to buy junk no one wants. And the “me me” of the season. So to make-up for the all the bad stuff I usually lose myself in a few mystery stories with Christmas as a backdrop. My only rule—if I actually have one—is that Christmas should only be a backdrop and not the central theme of the story. So this year I thought I would share a few.

The first is a Sheriff Dan Rhodes Christmas primer. It is a novella length story titled “The Empty Manger.” Blacklin County, Texas isn’t a typical Christmas location. There are no white Christmases, it is warm and there probably aren’t many pine trees. But it is the type of rural county where the people are eccentric, there is always a perplexing crime, and enough humor and mystery to satisfy any reader.

The story begins when Sheriff Dan Rhodes is called to investigate the kidnapping of the baby Jesus doll from the manger scene in downtown Clearview. Clearview, like the rest of America, has a decaying and nearly abandoned downtown and one of the plans to attract more traffic to the area is a live manger—including a donkey and a few goats. The production is sponsored by the local First Baptist Church and when Rhodes arrives to investigate the missing Jesus he finds much more—namely the murdered body of Councilwoman Jerri Laxton, a proponent of the downtown revitalization plan, in the alley behind the abandoned furniture store next to the manger.

“The Empty Manger” is pure Dan Rhodes. It is a whodunit with style, humor, and just enough hardboiled action to carry the mystery. Sheriff Rhodes is an old style detective. He doesn’t rely on crime scene investigation or science to solve his crimes, but instead he talks to people and generally noses around until he finds a thread and then picks and pulls at it until the mystery unravels.

The supporting cast, as usual, is an eclectic mix of varying eccentricity. Rhodes is surrounded by bickering geriatrics, hostile romance writers, nosy young reporters, spiteful housewives, lonely widowers and a host of small town goofballs that not only make good suspects, but act as foils to Sheriff Rhodes. They tend to keep him in his place and whenever possible remind him of his failings, both past and present.

“The Empty Manger” is good and fun entertainment. It clocks in at 88 pages in paperback. It can easily be read in one sitting and it has everything that makes the Dan Rhodes series vibrant and it makes for a great escape from crowded super stores, clogged roads and cold weather.

“The Empty Manger” was published in the novella anthology Murder, Mayhem, and Mistletoe. It was released in 2001 by Worldwide and contains three additional novellas—“The Headless Magi” by Terence Faherty, “Christmas Cache” by Aileen Schumacker, and “Stocking Stuffer” by Wendi Lee.
Posted by Ben Boulden at 6:22 AM