"The King of Horror" by Stephen Mertz 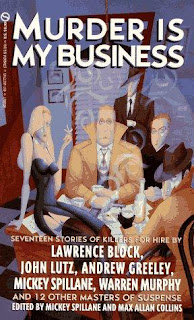 Rigley Balbo is a washed up horror writer. He drinks to much and blames everyone else for his problems—he knows that his career is stalled because the publishing industry blacklisted him, and he is envious as hell of the new crop of bestselling horror writers who don’t even have the decency to mention his name in the press—

“I’m the greatest horror writer who ever lived.

“The tragedy—for me as a professional writer, for you as a reader—is that, more than likely, you’ve never heard of me.

“You’ve heard of Stephen King. You’ve heard of Clive Barker. You’ve heard of Dean R. Koontz. Pretenders to throne, every one of them, and there are too many others like them. Talented pygmies in a land once ruled by giants like Poe, Lovecraft, Derleth, Bloch.”

Rig is a fading icon; more faded than fading in fact, but he has one last surprise story to tell his few remaining fans. One last tale to tell the world, and this story will be sweeter for the anonymity he will tell it from. He doesn’t mind that no one will know who the storyteller is; all he cares is that the story gets told.

“The King of Horror” is a smooth story that straddles the line somewhere between horror—the very idea of it!—and crime. It is fastened together with a straightforward narrative and a solid, literate and hard prose. It is told in first person and the narrator—Rig Balbo—is the perfect tour guide. He reveals the story to the reader in small bites; his angst, envy, fear and hate carefully guarded and concealed until the perfect moment of revelation.

Then there is the climax. It is perfect: ideal in its simple logic. It has the ring of truth. A touch of the twisted and unfair world we live, and maybe just a little justice.

“The King of Horror” is a sneaky and well-told piece of fiction. It is worth searching a few dusty old used bookshops for, or skulking across the pristine ether to find.

“The King of Horror” was published in the 1995 anthology Murder is My Business, edited by Mickey Spillane and Max Allan Collins. It also contains stories by Lawrence Block, Warren Murphy, Mickey Spillane and Ed Gorman, among many others.
Posted by Ben Boulden at 6:30 AM