TICKET TO RIDE by Ed Gorman 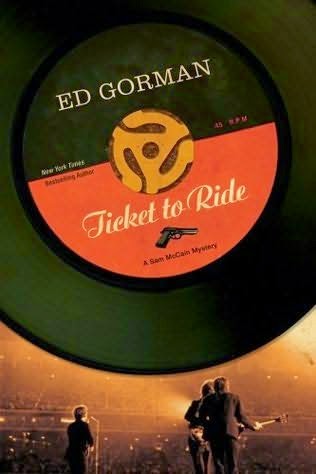 The eighth, and reportedly last, Sam McCain novel opens in 1965 at a Vietnam peace rally in Black River Falls, Iowa. The rally is held in the local Presbyterian Church and after 90 minutes of the same arguments—being spoken by different people—McCain is ready to leave the rally for the comforts of a double feature at the drive-in. But then as the newest local superstar, a pretty boy named Harrison Doran, is speaking a man takes the stage and asks to rebut the protestor’s arguments.


The man is not only the father of a casualty of war, his son died in Da Nang, but he is also a prominent and wealthy resident of Black River Falls. His name is Lou Bennett, and it doesn’t take long for boos to start and the scene to turn ugly. There is an altercation between Doran and Bennett, and then later that night Bennett is found dead. Harrison Doran is the likeliest suspect. McCain doesn’t like Doran, but he is enlisted to defend him, and it is a position that makes Sam less than popular amongst the mostly conservative population.

Ticket to Ride is a real treat. It features all of the regulars; the town’s pornographer, writer of sleaze, and McCain buddy Kenny Thibodeau, Judge Esme Anne Whitney, Jamie Newton—McCain’s guileless, but less than competent secretary—and the obnoxious and usually wrong police chief Clifford (Cliffie) Sykes, Jr. Mr Gorman perfectly captures the essence of small town America and he does it with a subtleness that never succumbs to cliché or stereotype. His characters are living, breathing people, who are never clearly good or bad—he shows their humanity in brief and poignant moments of vulnerability, weakness, and strength.

The plot is smooth and sharp; the prose is understated, readable and powerful—

“I wanted to say something smart, but his honesty surprised me. He was admitting that all the scorn hurt him. He had no right to tell me this, because, at least for the moment here, I had to feel bad about making fun of him all the time. Cliffie was supposed to be a cartoon. It pissed me off that he’d forced me to see him as a human being.”

The amazing achievement of Ticket to Ride is that it is written with a humor and innocent cynicism that allows the story a power of both place and time, and also a social commentary that is relevant for the story's Vietnam-era setting, as well as that of modern America. It is simple a brilliantly rendered private eye novel that is a wonderful addition to the series and the genre.
Posted by Ben Boulden at 12:58 PM

I always enjoy reading your illuminating and eloquent reviews, Ben....and you hit this one right on the nose! :o) Mary