UNDER THE BURNING SUN by H. A. DeRosso 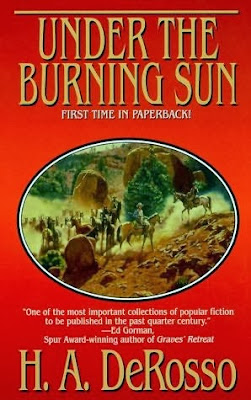 I read an astonishingly good collection of stories by pulp writer H. A. DeRosso titled Under the Burning Sun. The collection includes twelve stories; two are novelettes. Ten are straight westerns, although generally far from traditional, and the other two are suspense with a western voice. It was compiled and edited by Bill Pronzini; in his Foreword he writes the stories, save one, were lightly edited “to eliminate superfluous and repetitive passages contained in the original magazine versions.”

This collection is my first experience with DeRosso’s work and I was stunned by the power of his writing. It tended toward the unusual and bleak, the mythical and surreal, but it also vitalized the characters with a hard-bitten sadness and self-awareness that is rarely found in genre fiction. A major theme in the stories is one of hope, but it is hope that is never fulfilled.  The characters—the protagonists—can see a better place and future, but can never quite get there.

The best story in the collection is a novelette titled “The Bounty Hunter”. It is what Bill Pronzini labels a “shadowlands” story—a surreal western that is related more to the bleak other worlds of The Twilight Zone than a traditional western. It reminded me of Stephen King’s The Gunslinger.  It is a relatively simple story, and follows the track of a bounty hunter called Spurr. Spurr kills an outlaw who, he is told later, may be his own son. It is a mythical story—from the beautifully surreal landscape to the internal demons that drive Spurr to search for the truth.

The other stories range from the more traditional “Hold-up”—the story of the father of a failing rancher who is forced to choose between his self-identified morality and both his, and his son’s, future—to the rich rendering of the final months of the Chiricahuas’ fight to stay off the reservation in “The Last Sleep”.

Under the Burning Sun is more than a collection of western stories. It is a sample of how good the genre story can be. The violence—and there is some—is realistic and vivid. It is examined with a neutrality that allows the reader to see its effects on the characters and story. The “shadowlands” tales—“The Bounty Hunter” and “Those Bloody Bells of Hell!”—are brilliant.  The prose is written in a surreal form that depicts the landscape as a hellish nightmare where only monsters exist. It is best related to a high quality comic book; something like Jonah Hex.


Under the Burning Sun is a wonderful collection. It reads like a train steaming through the vast deserts of the Southwest; desolate, beautiful, and deadly. Bill Pronzini relates DeRosso’s style to the Black Mask school of hardboiled in general, and Cornell Woolrich’s work particularly.

This is indeed a great collection. The editing by Pronzini is very light. I compared a couple of the stories in the collection to their original magazine appearances and found only a very few changes. For anybody who hasn't yet tried DeRosso's work, this is a fine place to start.

One of the finest western writers of all time. He and Clifton Adams deserved much larger audiences.

How serendipitous that I just grabbed this book off my shelves this morning and started reading it. DeRosso is indeed very good. One thing that caught my eye in Pronzini's introduction is his mention of DeRosso's "mainstream" novel, In the Image of Dust. Apparently, it was rejected by publishers at the time. I wonder if there's anywhere one could read the original manuscript as well as who owns the rights to DeRosso's works.

Gonzalo. A good question. It appears, both from the copyright notices in the book and on the loc website, that Marquette General Hospital owns the copyright to UNDER THE BURNING SUN, and another Pronzini edited collection titled RIDERS OF THE SHADOWLANDS. It would be very interesting if the mainstream novel ms still exists, and if it does how hard it would be to find a copy.

H .A DeRosso is my great great uncle. I am an avid reader and love his work. However I am in search of a manyscript he wtote called "In The Image of Dust". a story about a mining Wisconsin Family. I donit think this was ever published as it was turned down. However. I believe this story may have some history of my family. Does anyone know how I would find this manuscript ? It was turned in but never published.

H .A DeRosso is my great great uncle. I am an avid reader and love his work. However I am in search of a manyscript he wtote called "In The Image of Dust". a story about a mining Wisconsin Family. I donit think this was ever published as it was turned down. However. I believe this story may have some history of my family. Does anyone know how I would find this manuscript ? It was turned in but never published.