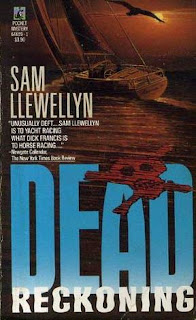 Sam Llewellyn is an author I discovered in the late 1980s as a teenager.  He wrote a series of suspense novels set in the British fishing village of Pulteney.  The novels all have sailing as a backdrop, and by my recollection none of them feature the same protagonist.

I recently reread Dead Reckoning, which is the first of the Pulteney sailing novels published in 1987.  It is narrated by Charlie Agutter.  Charlie is from an old Pulteney family, and he makes his living designing racing yachts.  The novel opens with Charlie receiving a summons to the village’s lifeboat.  A sailing yacht has been caught in The Teeth—a dangerous stretch of reef just off shore.  The stranded yacht was designed by Charlie, and is one of only two produced with a new light weight rudder, but even worse the dead sailor at its helm is his brother.


It appears the rudder failed and a heavy sea dragged Aesthete into the Teeth where its hull was cracked like an egg.  The accident hits Charlie hard.  He and his younger brother were close and his business is threatened with collapse due to the perceived failure of the new rudder.  Charlie is certain the rudder was sabotaged, but the saboteur is a step ahead and he can’t prove it.  The mystery is as much motive as whodunit.  Charlie isn’t sure why the rudder was tampered with, and if it was murder for its own sake—to kill his brother or the other man aboard the yacht—or an attempt to destroy him and his business by undermining the rudder design.
Dead Reckoning is a wonderful suspense-adventure mystery.  It was fairly (and correctly) compared to the work of Dick Francis by critics when it was released.  A slim line suspense mystery with a sport setting.  In this case yacht racing, but it is as much an adventure story as mystery, and it is seemingly influenced by the Alistair MacLean style adventure thriller.  It is heavy on description, setting (weather is always an adversary), action and suspense, and light on dialogue and whodunit ponderings.
Pulteney is a perfect setting for the story.  It is a boom town that was once a place where fishermen made their living from the sea, but it has been bought up by wealthy professionals and industrialists who use it as a place to moor yachts and brag about to their friends back in the city.  The rub between the old and new residents creates its own tension as Charlie works to solve the puzzle and catch the killer.  He walks a tenuous line between both old and new, and isn’t quite trusted by either.


Everything works in Dead Reckoning, but what sets it apart from its peers is the seamless weaving of both the culture and sport of yacht racing.  The plot cannot be extricated from its background, and one without the other would be completely useless.  The setting is exotic and familiar at once, and the characters are smoothly realistic in shades of both likability and familiarity.
Dead Reckoning was published more than 25 years ago, but it has held up remarkably well, and Sam Llewellyn is back on my list of favorite writers.

I enjoyed these books. Met Llewellyn at a Bouchercon many years ago. Haven't run across him since then, though.