THE REMOVERS by Donald Hamilton 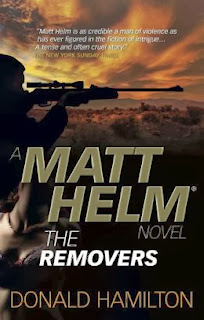 The Removers is the third novel to feature cold war spy, or more accurate, enforcer Matt Helm.  He is less spy and more enforcer because he acts as a counter intelligence wet work operative rather than an intelligence gatherer; or as Helm’s boss explains:


Matt Helm receives a cryptic note from his ex-wife seeking help.  She left Helm, and took their two small children with her, when his violent past found him.  She lives with her new husband on a ranch outside Reno, Nevada where a local hood is making subtle threats to Helm’s children.  Helm’s boss gives him permission to head west, but asks him to make contact with another agent working a case against a Soviet agent called Martel.
Not surprising, Helm’s personal business and the Soviet operation are one and the same.  The agent working the case is inexperienced and in short order Helm finds only he is standing between Martel, the safety of his children, and the Soviet plot.
The Removers is a smooth and exciting novel.  There aren’t many surprises, mainly because similar plots have been rolling over and over since it was published fifty years ago, but its execution is pitch perfect.  It is constructed from the ground up—the early action and plotting is interesting enough to keep the reader fully invested, while still leaving room enough for additional tension, action, and suspense without becoming overblown, unbelievable, and tedious.
The characters also contribute to the success of the novel.  There are the expected characters, whose only role is to fulfill the plot, but there are also the unexpected.  There is the flash bang daughter of the hood who is something close to a Helm ally, his ex-wife who is both less and more than expected; less because Helm wants her to behave as an operative, and more because she really is a decent woman.
The element which differentiates The Removers, and all of the Matt Helm novels, is the protagonist.  He is something other than.  Meaning he is an uneasy categorization; he isn’t sympathetic, and while he constantly plays the angles and never fully risks himself for another, he is far from amoral.  Which is something he would rather you didn’t know.  Although you should know this title, and all the other Matt Helm novels, are pretty damn terrific.
Titan Books is republishing the Matt Helm novels as attractive mass market paperbacks.  To date the first six novels in the series are back in print and two more are scheduled.  I hope there is enough success to get all 27 of the titles back in print because they represent the best the genre has to offer, now and then. 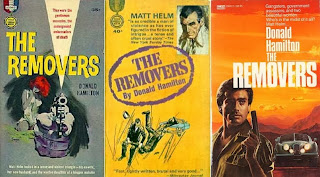 Great post, Ben. Just got a letter from Loren Estleman thanking me for posting about Hamilton sometime back. He enclosed a copy of a letter from Hamilton congratulating of Loren for winning the Spur award. That would be as muchof an honor as the Award itself.

I should've elaborated on my comment, Ben. Loren and Don had corresponded for years. But the Spur made Donald realize that was also a western writer, too. You know, like Don himself.

Ed, That would be an honor. Estleman is a pretty terrific writer in his own right. His JOURNEY OF THE DEAD is one of my two or three favorite western novels. And I can't say enough about Hamilton. BIG COUNTRY is a terrific novel, and his short story "The Guns of William Longley" is at, or near the top, of my favorite western short stories.