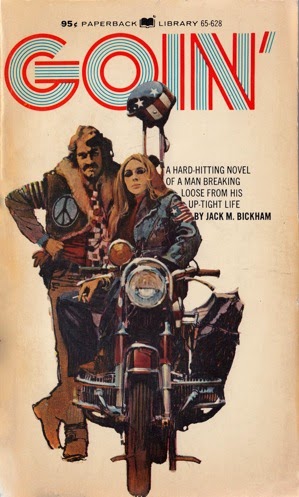 1971 was a big year for Jack M. Bickham.  He turned 41, published six novels, including his novel The Apple Dumpling Gang, and his much lesser known novel Goin’.  Goin’ is different than much of Mr Bickham’s work.  It is a mainstream novel.  Or at least something approaching a mainstream novel.  Perhaps a hybrid between a straight hippie novel and a modern western is more apt.

—and going through a mid-life crisis.  His hair has grown to his collar, he purchased a little Honda 450 street bike, and as the novel opens Stan is headed for the road.  He has no clear destination, but he knows what is behind him; an ex-wife, a young daughter, and a seething personal unhappiness.

Once on the road Stan joins two bikers who are short on cash, and he tags along to a farm outside the rural city of Kirkerville (likely Arizona, but it is never identified as such), and hires on as a fruit picker.  In Kirkerville he meets a young married woman named Elizabeth Faering.  She is everything he wants.  Young.  Beautiful.  Independent.  Free.  The two lovers concoct a future together, but the dream is interrupted by a fruit pickers’ strike.  A strike Stan agrees with, but a strike that is commandeered by a man who is less interested in getting the workers’ better pay and working conditions, and more interested in starting a revolution.

Goin’ is a pretty great novel.  It fits its time and place; think back to an age when motorcycle riders were considered hooligans, smoking reefer was an unconscionable sin, free love was the opposite of “up-tight”, and Eugene McCarthy was a saint of liberalism.

The tension is generated both by plot—the strike and the population’s reaction to it—and Stan’s inner turmoil.  He is an everyman outsider.  He attempts to fit, but he is ostracized by Kirkerville’s residents as an outside agitator, it is not uncommon for him to be called a “pinko,” and the strikers, particularly his two friends, view him as a traitor.  His affair with Liz ends badly, although not unexpectedly, and it is written with a powerful simplicity, which makes Stan’s emotional pain visceral.

Goin’ was published as a paperback original by Paperback Library in July 1971, and to my knowledge it has never seen print again.

This review originally went live April 4, 2014, and I've been thinking about it again the last few weeks. It is a very good novel that should have an audience.
Posted by Ben Boulden at 7:18 PM

I read this novel about five years ago. I initially had high hopes for it and, while I agree it mirrors its time, I found it too "square".
For instance, what biker would become immediate friends with a middle aged man riding a tiny Japanese road bike?
It's well written, no doubt, but seemed flat to me. As for the book itself, it's very difficult to locate in collectible condition, probably because it's thick and has mostly white wraps.
I don't know, when I began reading it, I thought it would be more like a Jack W. Thomas novel. Still, I am glad I took time to read it and appreciate your fine review of it.

I like your observation about the square middle age man riding the small Japanese road bike. When I read it a few years ago the motorcycle made me laugh, but I didn't think about the middle age part. Probably because I was nearing my fortieth birthday and felt a certain sympathy towards the protagonist's plight.