MURDER AS A FINE ART by David Morrell 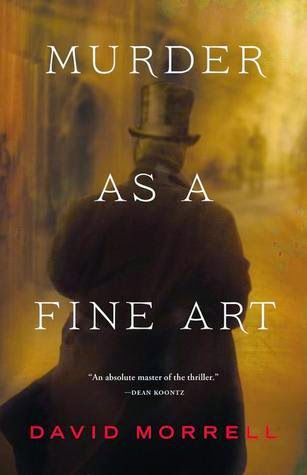 David Morrell is anything but predictable. His first novel, First Blood, was a brilliant action piece that introduced the now iconic character Rambo—christened “John,” made less lethal, and given a very Sly Stallone humanity, not to mention slur, in the film version. The 25 novels, and more than 40 years, that followed (so far) he has written a Western—The Last Reveille—horror—The Totem, Long Lost, and Creepers—and more than a few thrillers—The Brotherhood of the Rose, Fraternity of the Stone, The League of Night and Fog, etc. The common theme? There are two, actually: 1. high quality, almost literary, action oriented violence, and 2. fear.

His latest novel, Murder as a Fine Art, is another seeming departure from his usual. It is an historical mystery set in Victorian England, but it is very much stamped with Mr Morrell’s “you are there” action and descriptive style—

“Vomit was on the floor. The books were disarranged. One of them was open, vandalized, a page having been ripped from it.”

The protagonist is a frail, hopelessly opium addicted, 69 year old essayist named Thomas De Quincey. Mr De Quincey is an historical figure whose 1821 essay “Confessions of an English Opium-Eater,” an early example of the ever popular addiction genre, caused an uproar in the tightly buttoned Victorian culture. “Confessions” is the basis for the character Thomas De Quincey, but the basis of the novel’s plot is a true-crime, and likely satirical essay, written by Mr De Quincey titled “On Murder Considered as One of the Fine Arts.” “Murder” details the Ratcliffe Highway killings in a poor section of 1811 London. A murder spree that paralyzed England in its entirety, as Mr Morrell explains in his Introduction—

“But in fact the panic that resulted from the Ratcliffe Highway killings was far worse and more widespread [than the Jack the Ripper murders in 1888] because those multiple murders were the first of their kind to become common knowledge throughout England, thanks to the growing importance of newspapers….”

The year is 1854. It is a cold December night when a man reenacts the original Ratcliffe Highway murders. He kills a shopkeeper, his wife, two children—one a baby still in its crib—and a servant. The method of the killings is identical to the original murders. A mallet to the head and a knife slash across the throat. The original killings were followed 12 days later by the murder of another family in a London tavern. A merchant seaman was arrested Christmas Eve, and killed himself before trial.

The murders of 1854 have the same effect as the original 1811 murders: panic. The city’s populace is frightened, and everyone is suspect; particularly anyone who is different. A foreigner in general, and Irish in particular. The London Police Department is less than thirty years old, small, and the science, or perhaps art, of detection—reading a crime scene, forensics (footprints, etc.)—is in its infancy. The lead detective, who is one of eight plainclothes officers in London, is a redheaded Irishman named Detective Inspector Sean Ryan. He conceals his red hair, and therefore his Irish beginnings, under a newspaperboy’s cap. It is unfortunate racism and hate is relevant to every generation.

When the police commissioner connects the original murders, committed when he was a boy, to the current murder spree, Thomas De Quincey’s essay on the subject becomes of interest. When it is learned that De Quincey is in London on a publicity tour he, despite his age and frailty, becomes a suspect. Traveling with Mr De Quincey is his 21 year old daughter Emily; a young woman who is something of a progressive—she chooses to wear bloomers rather than the more appropriate, and much heavier, hoop dresses—and very industrious. A significant portion of the novel’s narrative is in journal form, written by Emily. She is an alluring mixture of Sherlock Holmes’s Dr Watson, and Bram Stoker’s Mina Murray.

The momentum of the novel is the multiple murders, but it is the atmosphere, and the setting that consume it. It is written with a tense, immediate style. The thick, acrid fogs of the city “smelled of chimney ashes.” The description of a large city without real lighting, electricity. A police force in its infancy, and a palpable terror. The narrative—aside from Emily De Quincey’s journal entries—is third person omniscient, which is used effectively to describe and explain setting—

“The color of laudanum is ruby. It is a liquid that consists of 90 percent alcohol and 10 percent opium. Its taste is bitter. A Swiss-German alchemist invented it in the 1500s when he discovered that opium dissolved more effectively in alcohol than water. His version included crushed pearls and gold leaves.”

Thomas De Quincey reminded me of Sherlock Holmes. His participation in solving the crime is deductive. He accurately identifies the key elements of the mystery—what is known, and what that knowledge means—to create a profile of the killer. He also enlists the help of gang of homeless men and boys to act as lookouts.


De Quincey and Emily are fully developed characters. Likable and believable. The remaining characters, including Sean Ryan and the killer, are less developed, which creates an oddly effective Victorian potboiler—Emily and De Quincey are sharply in focus, but the picture softens as it moves from the center. It allows the plot to develop in ways that are more modern than the historical setting (at least literarily), and also creates an uncertainty of narrative that heightens the tension.
Posted by Ben Boulden at 5:48 AM

Ben, I recently saw and read about this novel online and was in two minds whether to buy it. I might check out some of David Morrell's other novels before I get round to this one. I also did not know the author had written FIRST BLOOD. Thanks for a very fine review.

Prashant. You really can't go wrong with David Morrell. A few of my favorites are THE BROTHERHOOD OF THE ROSE, FRATERNITY OF THE STONE, and LEAGUE OF NIGHT AND FOG, which form a loose trilogy. They are really very good action oriented spy thrillers. I also liked THE TESTAMENT (his second published novel, I believe), and my favorite of his most recent work is CREEPERS.