Jack Bickham died of lymphoma in July 1997 at the age of 66. He is best remembered as a teacher of writing. He wrote several successful, and still in print, how-to writing titles for Writer’s Digest and he lectured in the journalism department at the University of Oklahoma. While he is mostly remembered as a teacher, Mr Bickham was also a fine novelist. He wrote in several genres; mystery, suspense, Western, and science fiction. His most successful novels, stylistically, thematically and commercially, were his Brad Smith suspense novels. A series that featured an aging tennis pro who is also something of a semi-pro spy. The Brad Smith novels were published by Tor/Forge between 1989 and 1994. See the line up here.

The Brad Smith novels were written and published late in Mr Bickham’s career. A career that began in the pulp paperback era. It started with one the pulpiest producers of all: Ace Books. He wrote seven novels for Ace between 1958 and 1961; each as one-half of a double. Six Westerns and a lonesome mystery. The covers are lurid, and the writing is brief and stark. These titles are different than his later work, but also the same. They are certainly shorter (mostly running about 125 pages in mass market), and absolutely by the hand of a writer still learning his craft, but, much like his later work, each is strong on sensible plotting, reliable cause and effect action, and entertaining and likable characters.

Below is a list of Mr Bickham’s work published by Ace. The pertinent information is all there: title,year published, Ace serial number, and the companion book. And, more importantly, a nice fresh, newly minted, scan of the cover—front and back—of each book.

Gunman’s Gamble. Ace D-308. Published in 1958 with Draw and Die! By Roy Manning. The first sentence:


“The sky had already begun to streak with pink and purple of nightfall when he rode to town, but the townsfolk came alive when they saw him.” 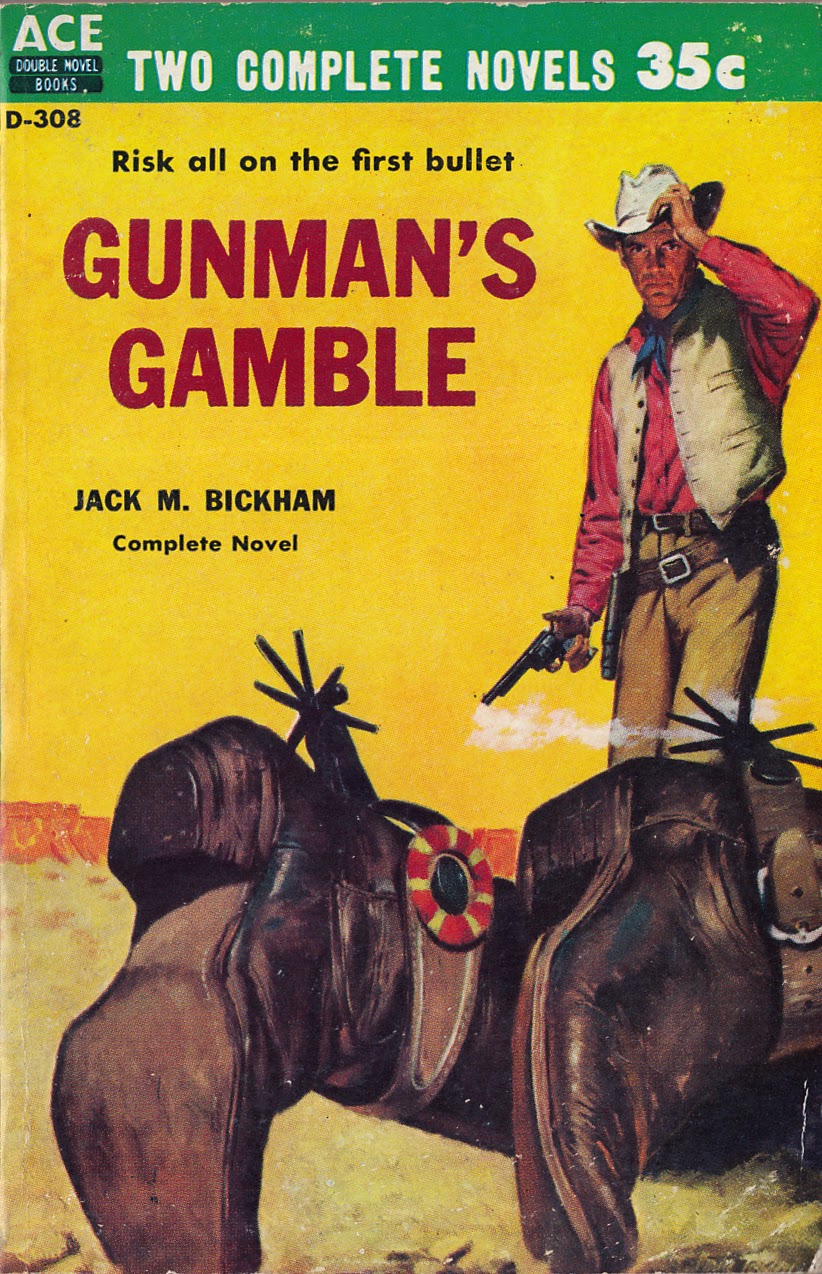 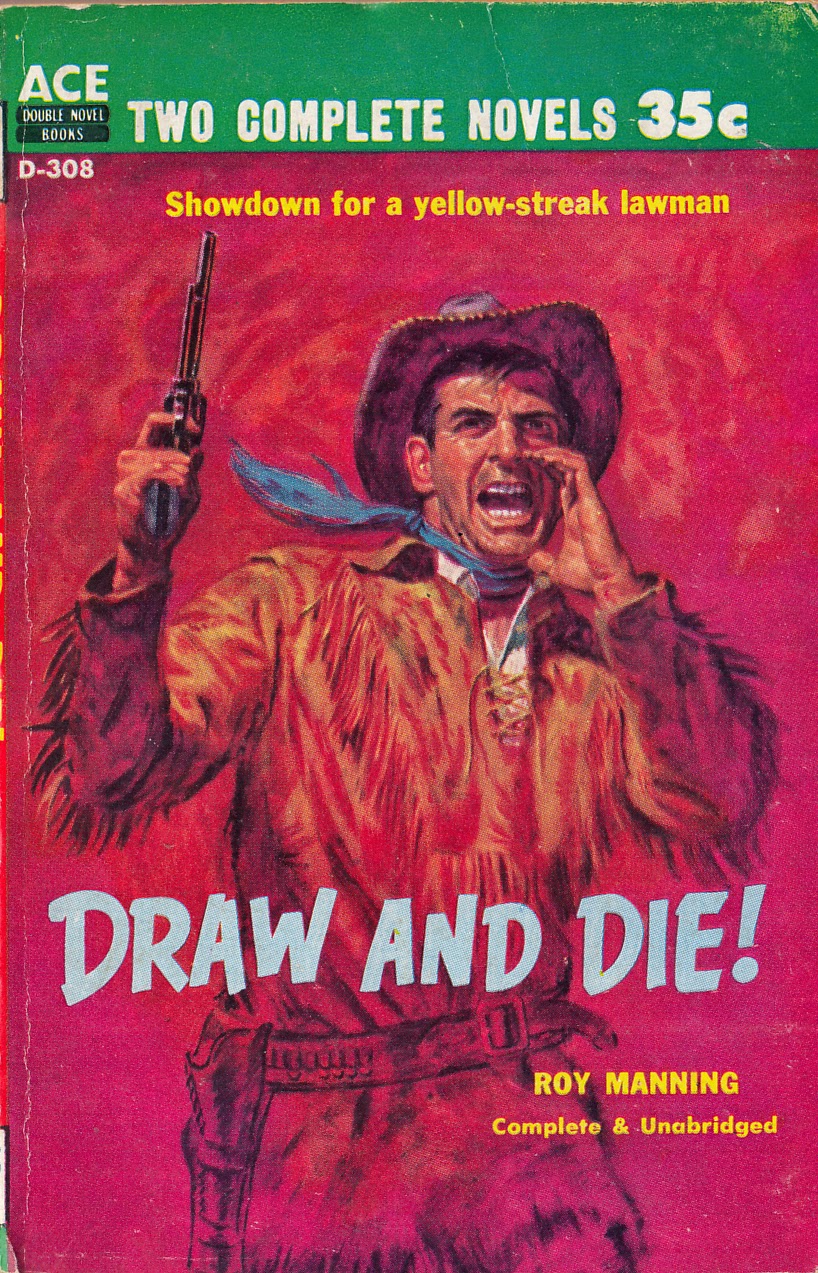 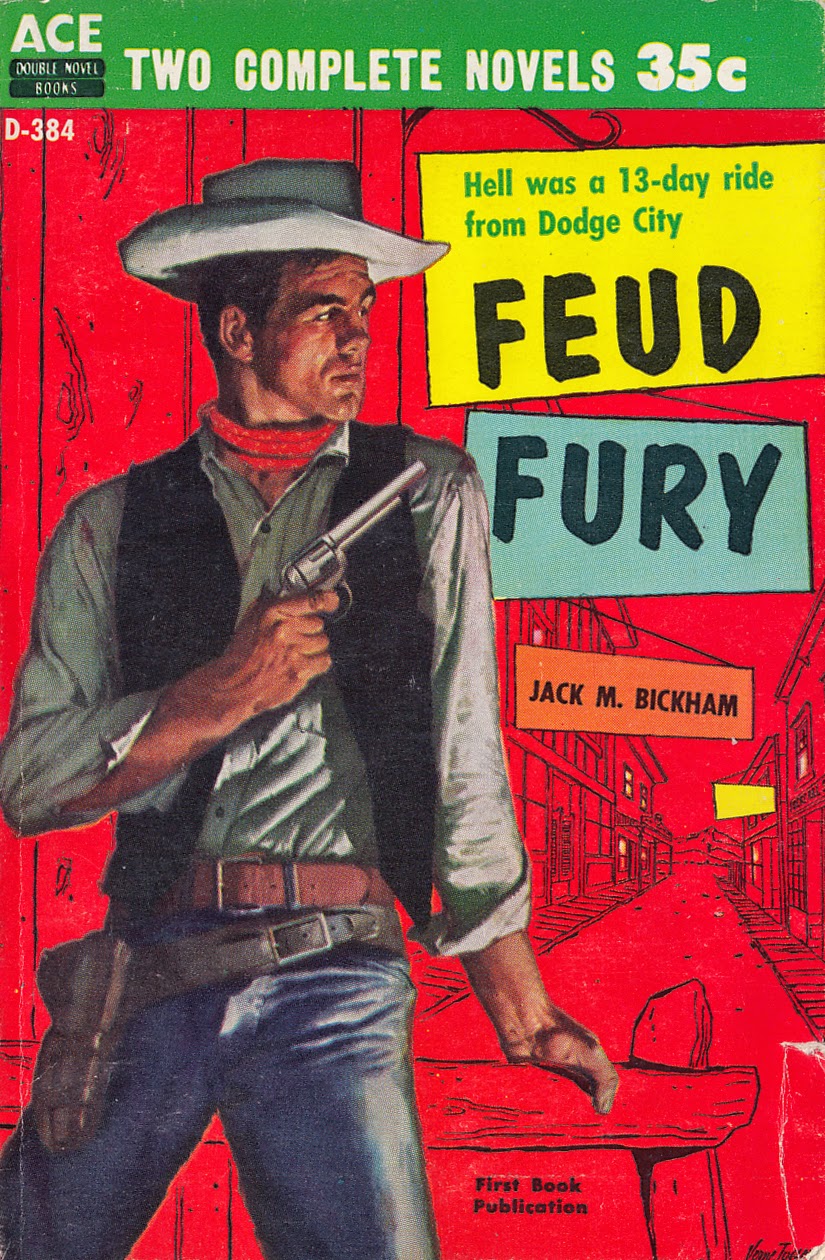 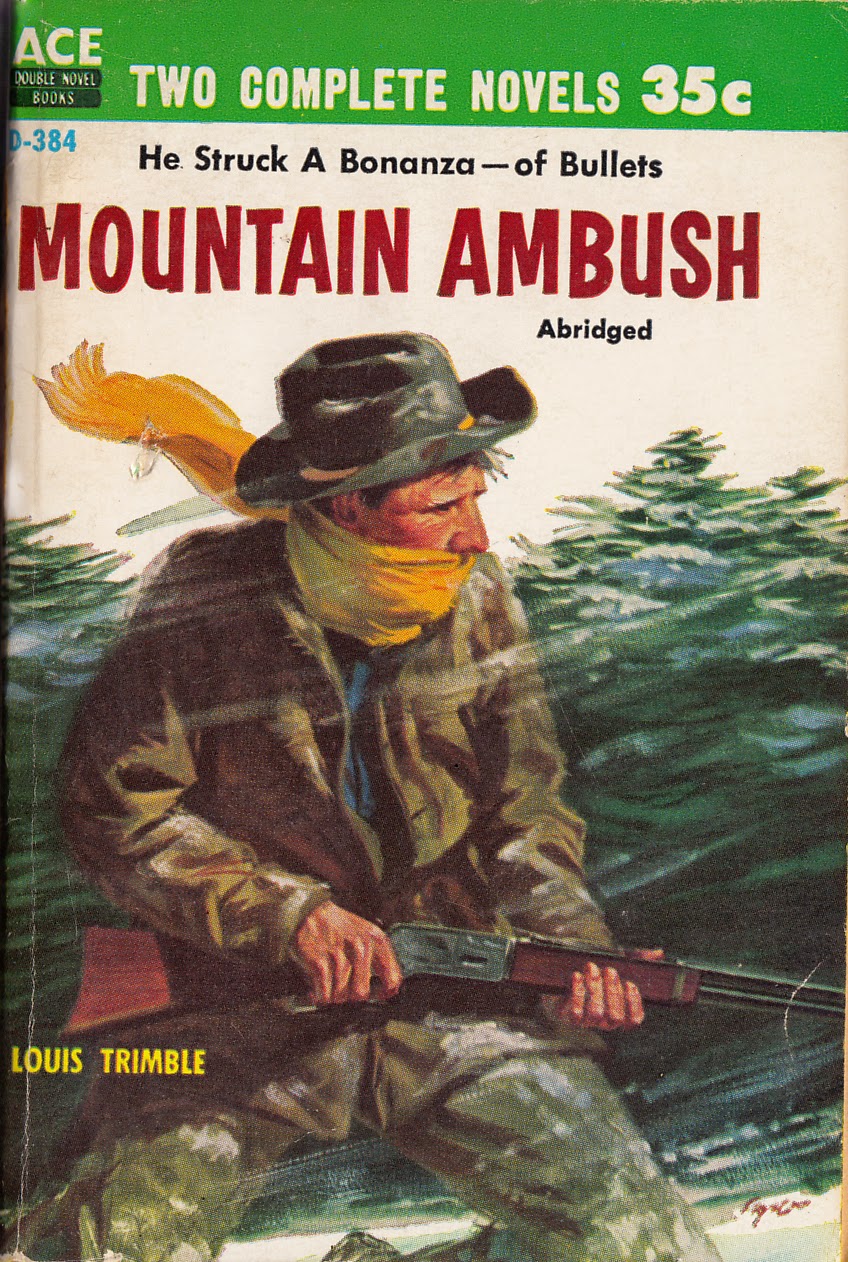 Killer’s Paradise. Ace D-442. Published in 1960 with Rider of the Rincon by Rod Patterson. The first sentence:


“The eleven men stopped their steaming horses at the crest of the treeless hilltop and paused for just a moment, still in the driving, cruel July Kansas rain.” 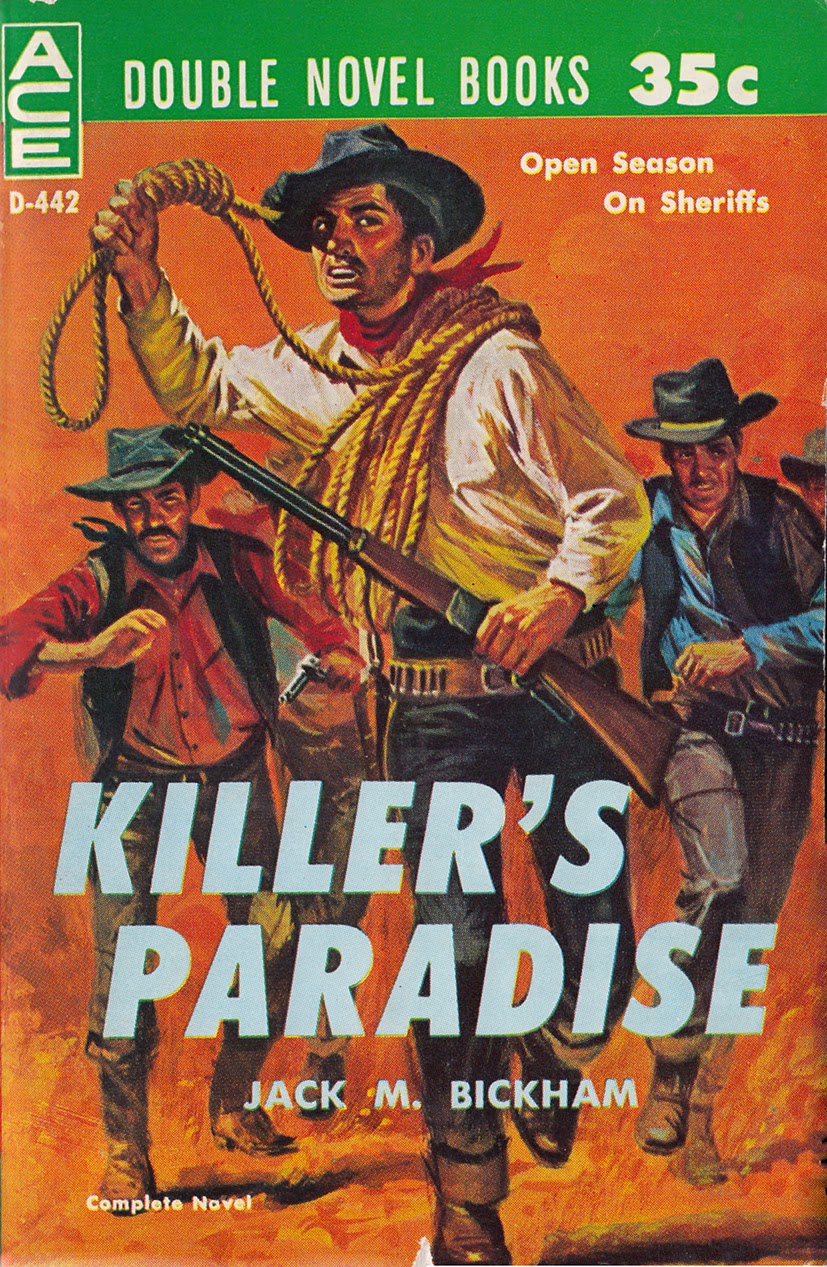 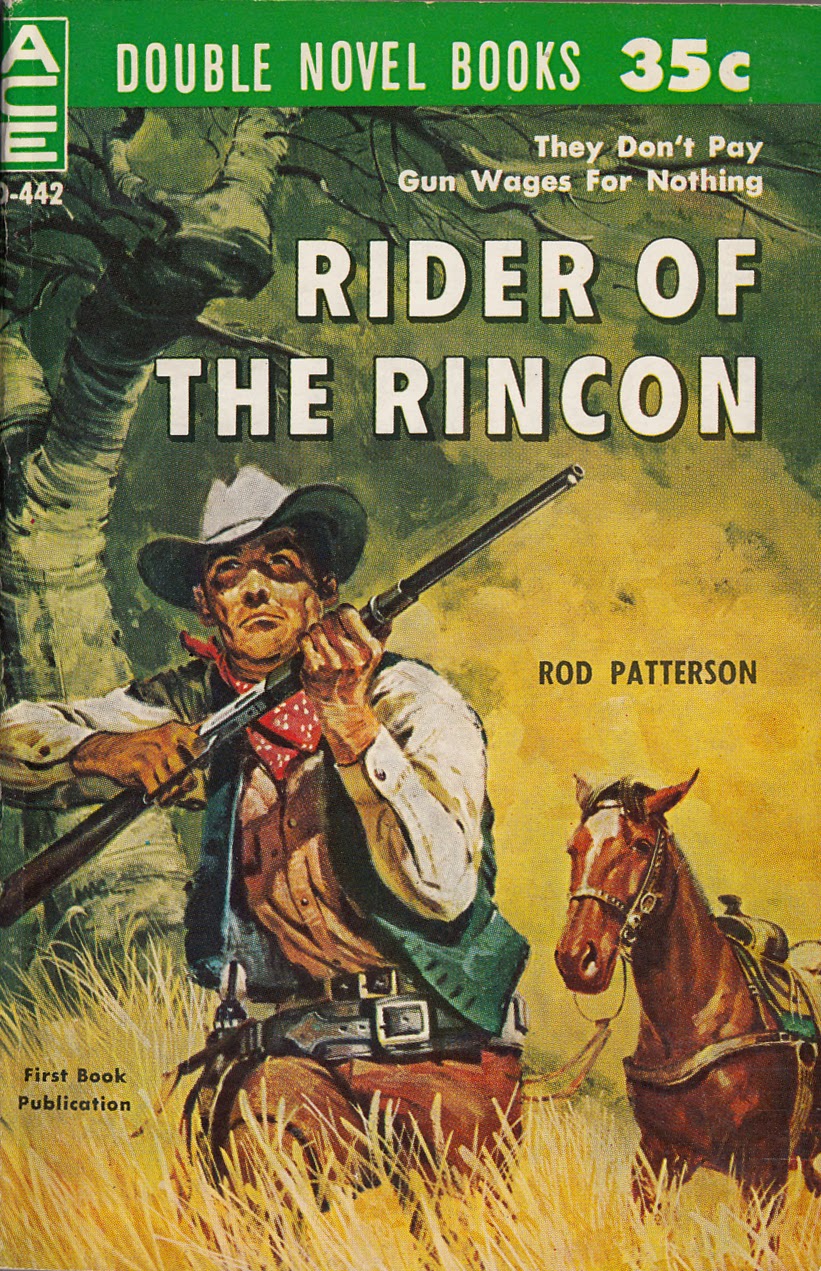 The Useless Gun. Ace D-462. Published in 1960 with The Long Fuse by John A. Latham. Read the Gravetapping review. The first sentence:


“Four killers, honed to perfection in a series of raids and county seat wars, rode west out of Dallas County, Texas.” 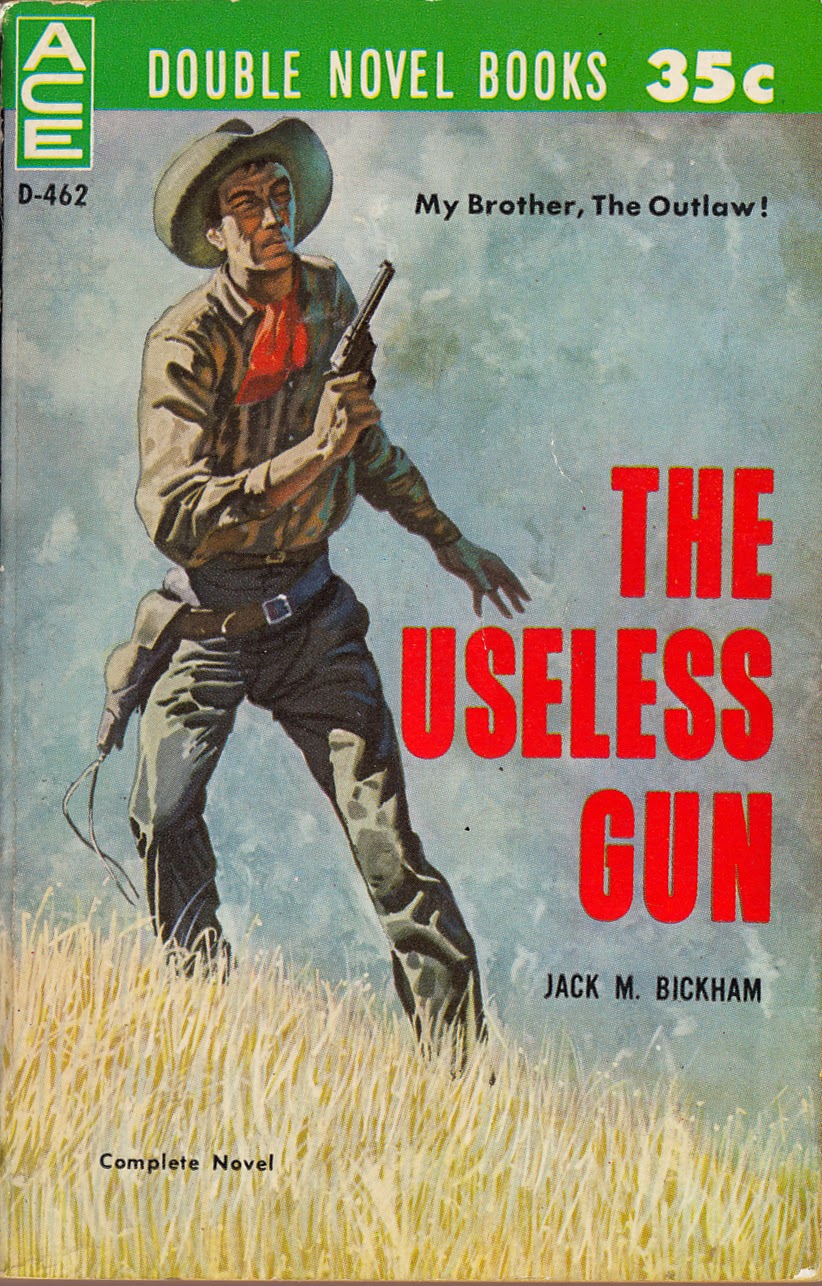 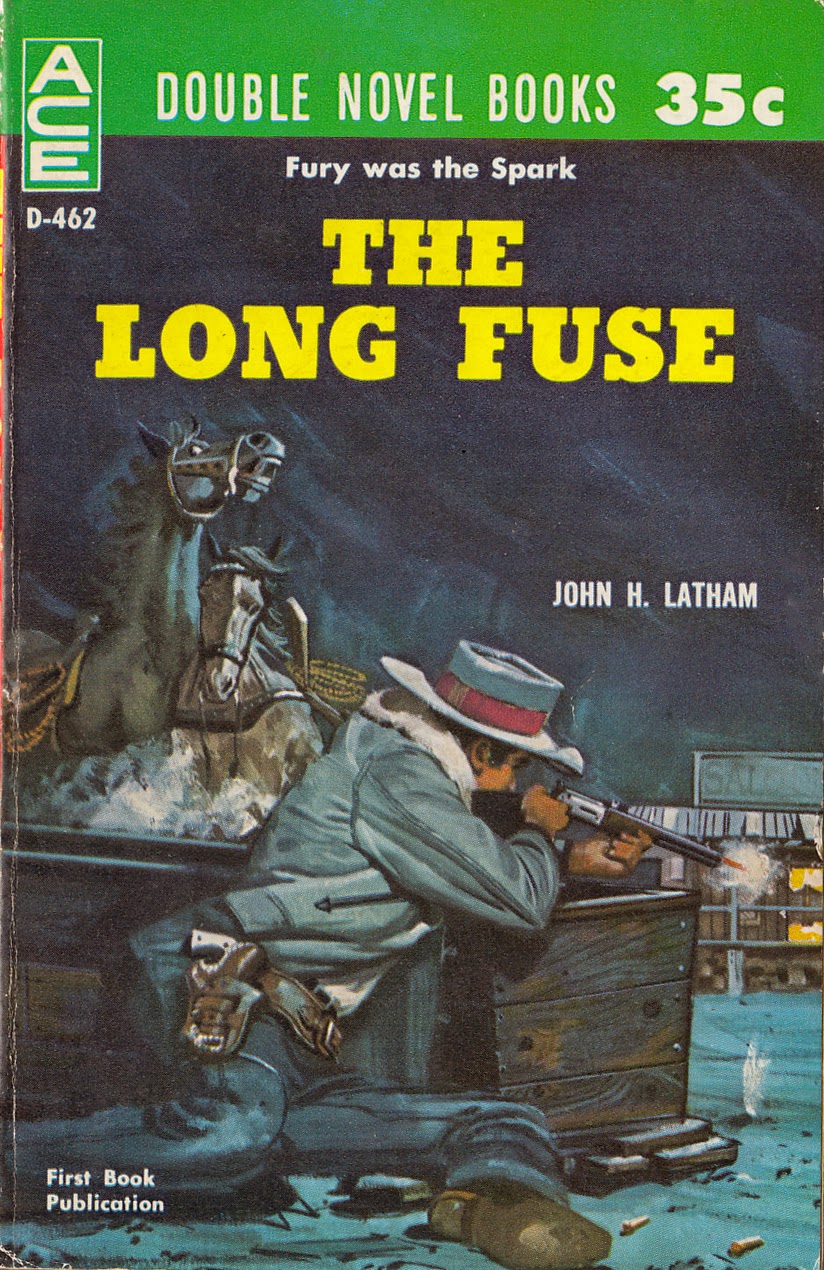 Dally with a Deadly Doll. Ace D-489. Published in 1961 with Somebody’s Walking Over My Grave by Robert Arthur. The first sentence: 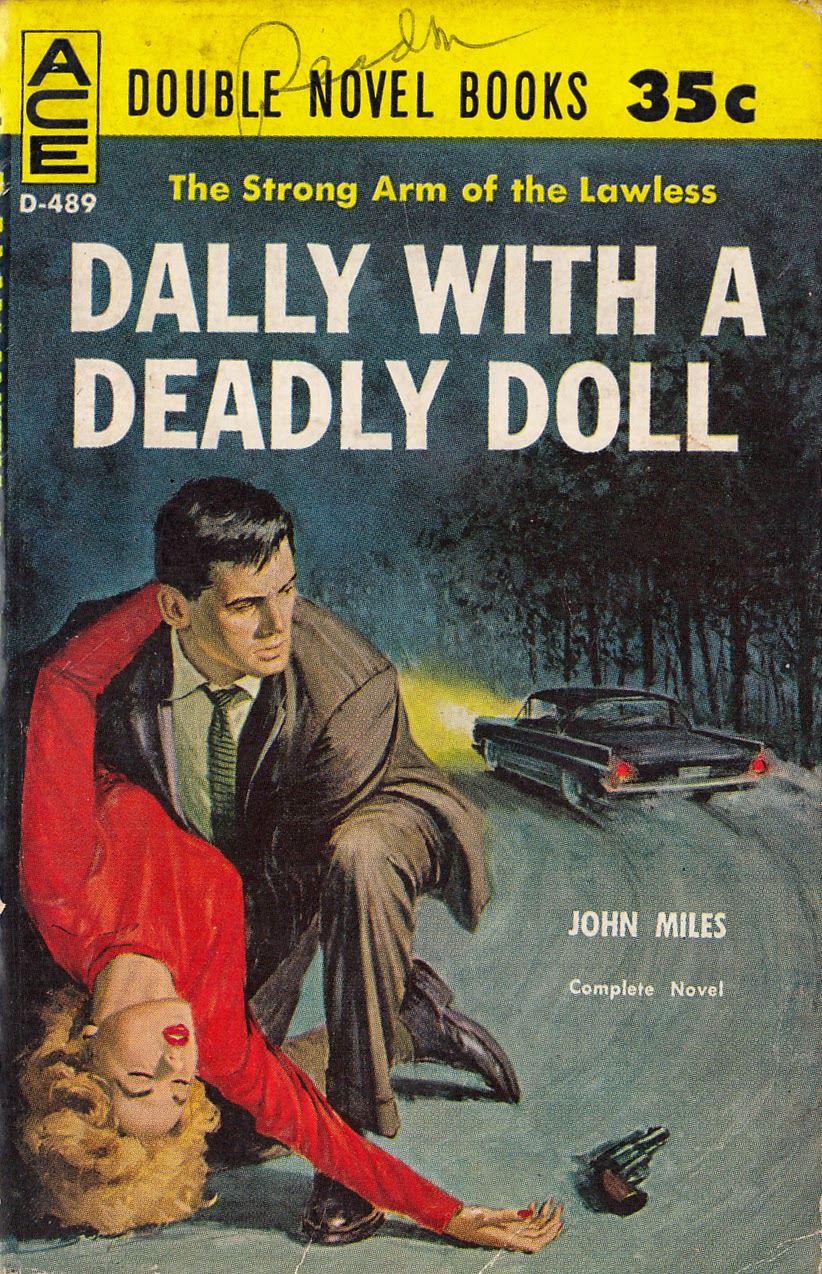 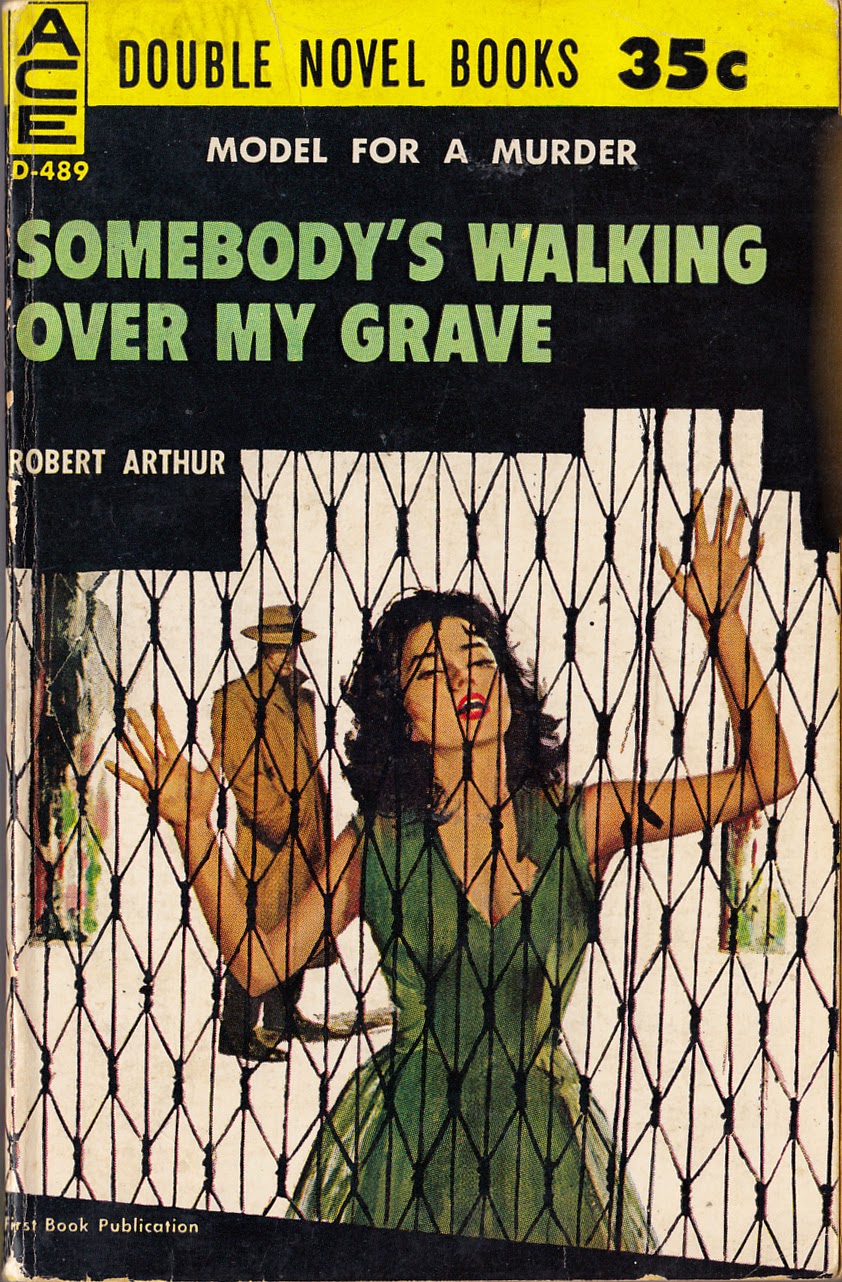 Hangman’s Territory. Ace D-510. Published in 1961 with The Searching Rider by Harry Whittington. The first sentence:


“The late spring storm was breaking.” 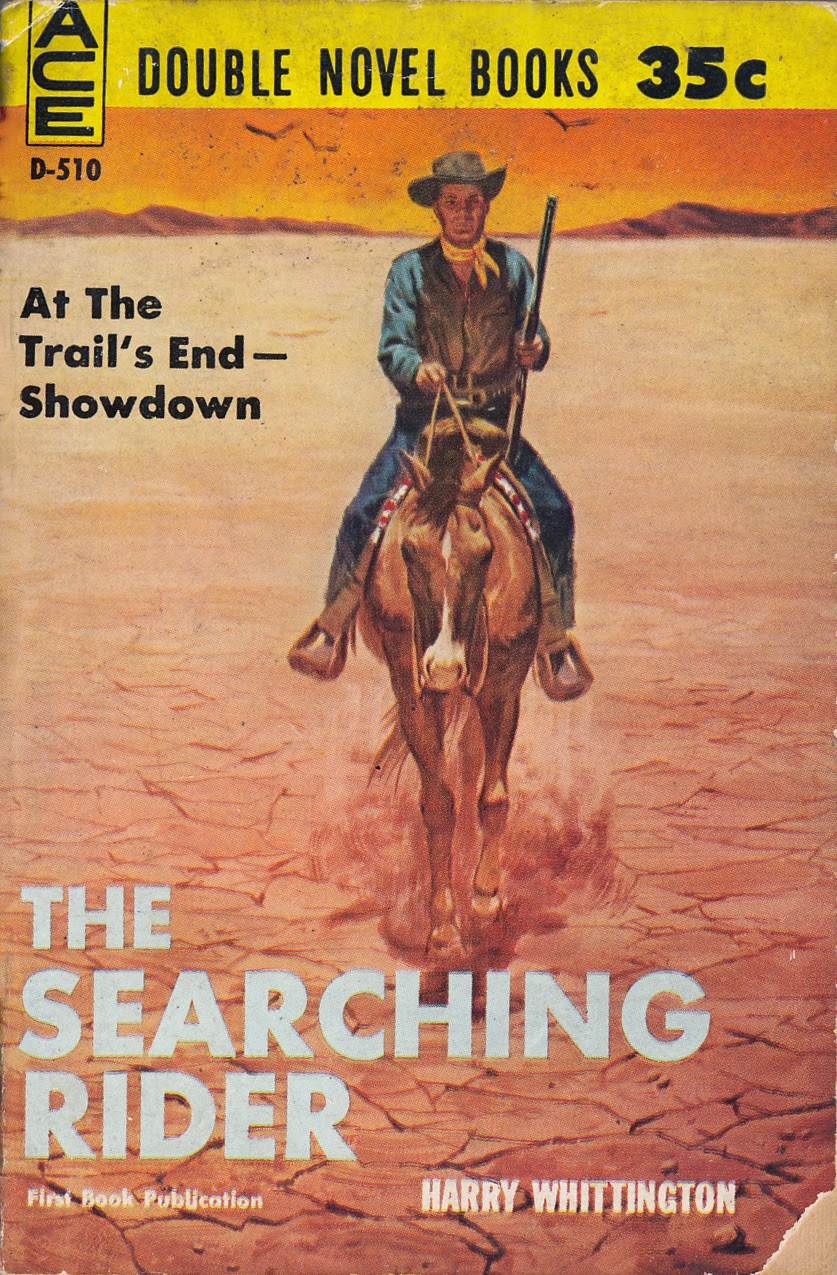 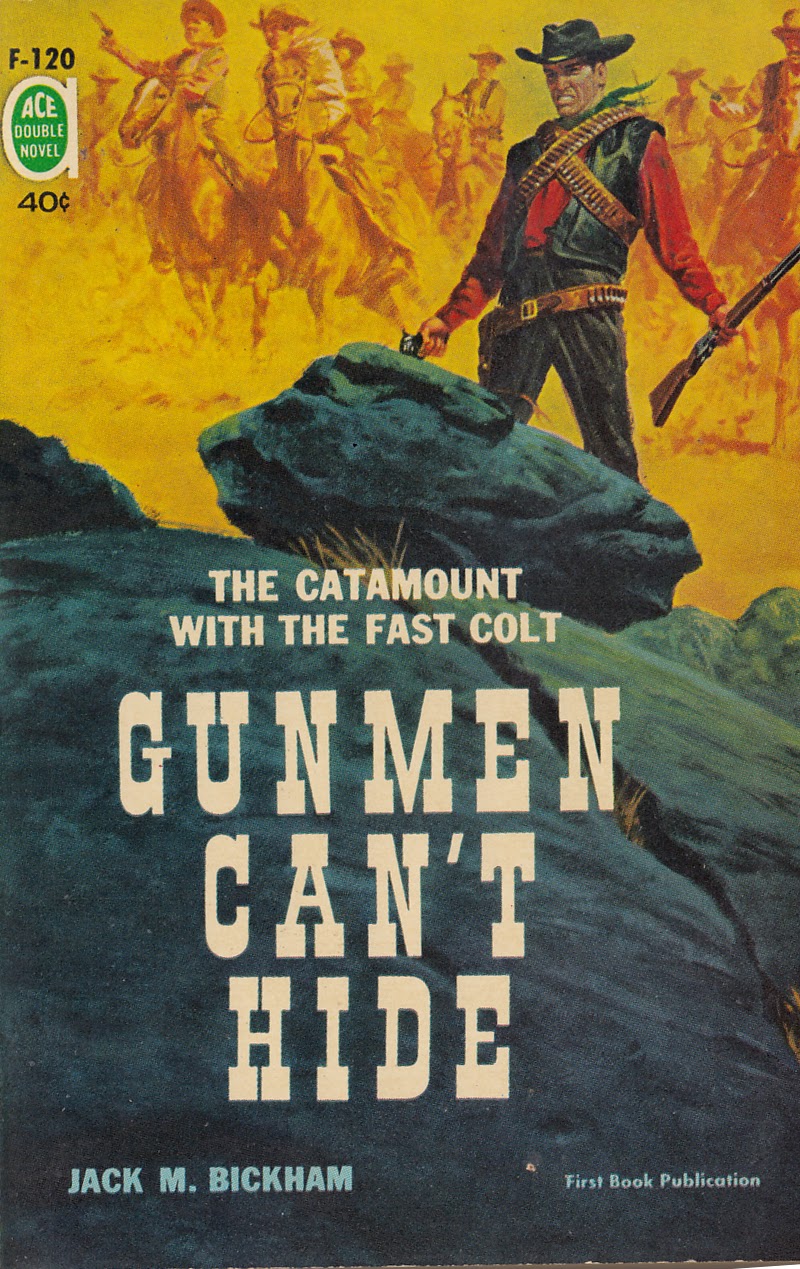 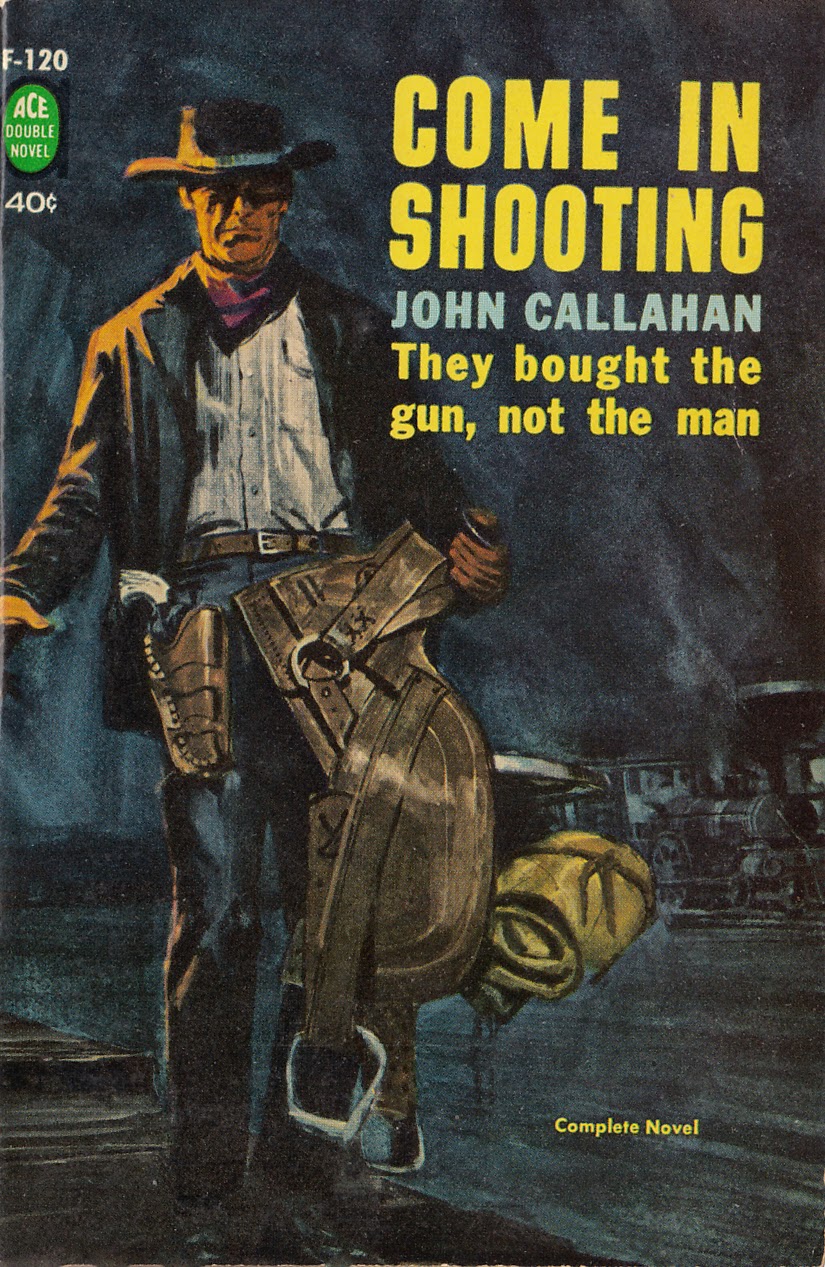 This post originally went live January 17, 2010 in a very different form. The text was adjusted (hopefully for the better) and the book images were changed out for the bigger and better versions. I hope you enjoy.
Posted by Ben Boulden at 8:00 PM

He was a hell of a good writer and a hell of a good man. Dozens and dozens of writers have acknowledged how much they learned from his classes. I got to know him because he wrote for Mystery Scene. We talked a few times on the phone as well. My favorite suspense novel of his is The Night Hunters which I have on my keeper shelf to the right of my desk. He sent me a first edition hardcover with a very amusing inscription. One of his biggest disappointments as a writer was when the now defunct Bobbs-Merrill published a novel of his that could have been a break out book but just kind of tossed it out there as most publishers do with books they perceive as mid-list. Tremdenous word of mouth and reviews. He immediately got a nice movie option but the novel was never filmed. One of his books for Tor got an especially nice review from Don Westlake. His kind doesn't come around very often.

In the 90's, when I was a callow and naive youngster, I read SCENE AND STRUCTURE. Before that, I had no idea what constituted a scene, and this book was a real eye-opener. Things suddenly made a lot more sense.

They've been out of print for many years now, but the Wildcat O'Shea novels are pretty entertaining. Definitely worth a look.

I'm not surprised Bickham had good things to say about Adams. Both were friendly with Dwight V. Swain, who wrote the fascinating TECHNIQUES OF THE SELLING WRITER.

Ben, thanks for introducing me to the works of Jack Bickham and his Brad Smith novels. I like reading mysteries and westerns with "brief and stark" writing. Some of the western covers remind me of the pocket western comics I read in my teens. I still have a few of them around.