Judas Country was published in the United Kingdom by Hodder & Stoughton as a hardcover in 1975. The edition that caught my eye was the Pan paperback edition published in 1977. The cover successfully portrays violence in an otherwise serene locale—the softly golden colors hint at sunset in a nicely rural, very Mediterranean, background shattered by a shot-up Beetle and a crouching man with a revolver. The artist: Harry Hants. 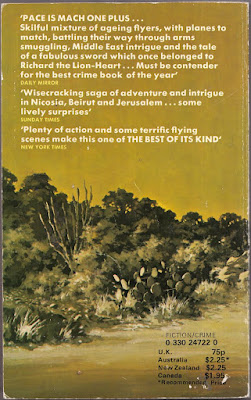 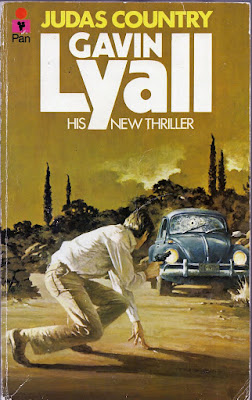 “A few minutes ago the sky had been a place. Of clouds, winds, pressures, turbulence. Now, it was just the décor of a flashy Cyprus sunset. The propellers wound down and stopped with a brief, violent shudder, but I went on sitting there, running my hands over the still-unfamiliar avionics switches and trying to wriggle some of the stiffness out of my neck and shoulders. A small Ford van dashed up and stopped just in front.”


Judas Country is, like most of Mr. Lyall’s early work, centered around aviation and it is considered by many critics to be among his best novels.
Posted by Ben Boulden at 7:42 PM

The cover is by someone I know quite well, George Sharp who is no longer painting but still going strong. I also know who has the original artwork to this and Midnight Plus One also by George. Cheers, Tim

Thanks Tim. I also have Pan's Midnight Plus One, and it is great to put the artist's name to cover art. I very much admire this era of British paperback art, and when I find one I have a hard time leaving it on the shelf.

John. I agree. Lyall was one of the crown jewels of the post-WWII British adventure writers. I want them all, too.

I have to make a correction. I said these covers where by George Sharp, which was the name given to me by the owner of the original artwork BUT on checking with George he says they are not his but by someone new to me Harry Hants.

Thanks for the update. I looked up Harry Hants, and the cover illustration does look like much of his work. I updated the post.