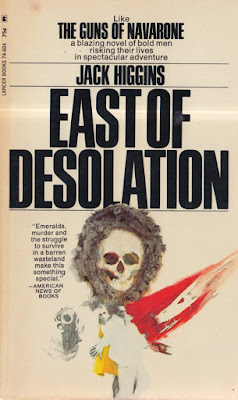 East of Desolation is the twenty-second novel published by Harry Patterson, and the first to appear under his most famous byline, Jack Higgins. It is also a pivotal title in his transition from midlist to bestselling writer. It was originally released in the U. K. as a hardcover by Hodder & Stoughton in 1968, and it was issued in the United States by Doubleday & Company; it was Mr. Patterson’s first U. S. appearance in hardcover.

Joe Martin is a British pilot flying an Otter Amphibian from the small town of Frederiksborg on the southwest coast of Greenland. The flying season is short and the climate cold, but the money is double what he can earn elsewhere and its lack of civilization suits him. He has summer contracts with several mining outfits, and a special deal flying provisions to an Ernest Hemingway-style actor hunting polar bears and everything else drawing breath. The actor is a washed up legend named Jack Desforge who authors, and perhaps believes, his own mythology.

Things get interesting when an insurance adjuster, Hans Vogel, arrives with the widow of a pilot whose crashed airplane was discovered on the ice-cap a year earlier. Vogel wants Joe to fly him to the wreckage to identify the pilot. The story, both Vogel’s and the widow’s, Sarah Kelso, doesn’t add up and Joe has an uneasy feeling about the whole thing.

East of Desolation marks Harry Patterson’s entrance to the top-tier of adventure writers—Alistair MacLean, Desmond Bagley, Hammond Innes. It is markedly better than its predecessors; its characters are richer with less caricature, the plot is larger with more doubt about its conclusion, and its setting is sturdy with a forbidding sense of isolation. It is first person narrative with a hint of the unreliable. Joe Martin knows more than he is sharing with either the reader or the other players. A characteristic shared by most of the cast—Desforge, Kelso, Vogel—which generates significant tension and unease.

Joe Martin is the most developed protagonist of Mr. Patterson’s early work. He is, like many of Mr. Patterson’s protagonists, a man who has fallen below his station, but he is also more; an alcoholic, divorced, and hiding. His relationship with women is more complex than the usual and there is a nicely executed romance between he and an actress friend of Jack Desforge. An early line nicely defines his feelings—

“I think it was General Grant who said: War is hell. He should have added that women are worse.”

The is plot complicated, there are more variables than Mr. Patterson’s earlier work, and a larger cast with believably suspicious motives. It is enhanced by the strong and forbidding setting of Greenland. The flying scenes, to a rank non-pilot, have the feel of reality and give the story a sense of high adventure. And everything works perfectly.

One of my favorites of his books.

Mine too. I had forgotten how much I liked it and re-reading it was like finding an old friend.

Ben, I have not read this Jack Higgins title yet. Most of his protagonists, including Sean Dillon, Paul Chavasse, Martin Fallon, and John Dillinger, are more or less like Joe Martin. Some, in my opinion, stand out more than others, like Neil Mallory in "The Last Place God Made," Liam Devlin in "The Eagle Has Landed," Henry Martineau in "Night of the Fox" and Jack Drummond in "The Iron Tiger." Besides, he also tends to repeat character-names like Kelso and Vogel.

Prashant. He does have a typical protagonist type, and Joe Martin is a very good example. He is less than he could have been, relatively moral with a touch of sadness to him. The best of his protagonists, in my mind, are between East of Desolation and his early big bestsellers; Eagle Has Landed +. He repeats, and frequently, but it has never really bothered me as it would with most other writers and I'm not completely sure why.

Ben, the repetitions don't bother me either. I agree, his heroes are "relatively moral with a touch of sadness." Most of them are hopeless romantics, almost to the point of being patronising in a nice way. I have read many of his novels and I found them all highly entertaining.

I like your idea, "Most of them are hopeless romantics, almost to the point of being patronizing in a nice way." I think it is the sadness (without bitterness) and the hopeless romantic aspect that make his protagonists so likable, and forgivable.