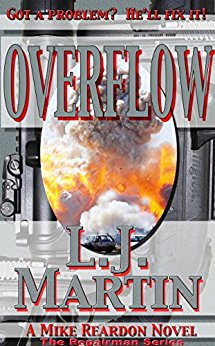 Overflow is the eighth novel in L. J. Martin’s The Repairman series featuring former Marine turned troubleshooter Mike Reardon. When a federal judge is killed on a public bus, destroyed by a deliberately set explosion during Las Vegas’ morning commute, the FBI’s first instinct is to blame it on terrorists, which seems accurate enough when an organization called Destroy Satan America claims credit. A Las Vegas casino owner, Alex Pointer, wants to hire Reardon and his pal, the very wealthy entrepreneur Pax Weatherwax, for a very special job:


“I want you to find, and kill slowly, with as much pain as you can stand to apply, whoever is responsible for the bus bombing.”
Reardon isn’t a hitman and he doesn’t like to work where he lives, but with a few provisions, no cold blooded murder—for either he or Pax—and a big payday, he takes the job. It isn’t long before it becomes apparent the bus bombing is more complex than it appears, and even less time for the bullets to start flying.

Overflow is a blazingly fast novel. The action is relentless, the story exciting. A few nice descriptions of greater Las Vegas and a barrel of oddball characters give it color. Reardon and Pax have a symbiotic relationship similar to Robert B. Parker’s Spenser and Hawk, and, also like Parker’s characters, they spar good naturedly with clever and often humorous dialogue. Overflow fits somewhere between the thriller, private eye and men’s adventure subgenres, and while it is the eighth in the series it is a good place to introduce yourself to The Repairman.