THE BIG SHOWDOWN by Mickey Spillane and Max Allan Collins 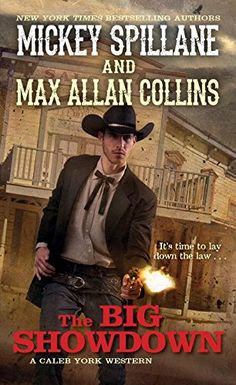 The Big Showdown is the follow up to Mickey Spillane’s and Max Allan Collins’ The Legend of Caleb York (2015). Caleb York is leaving Trinidad, New Mexico, where he has been sheriff since knocking down corrupted lawman and shakedown artist Harry Gauge, to take a job in the Pinkerton Detective Agency’s San Diego office. A good replacement has been found for Trinidad’s sheriff with Ben Wade, and as Caleb is saying goodbye to the girl he will regret leaving, Willa Cullen, Trinidad’s only bank is robbed at gunpoint.
Caleb guns down two of the robbers in the street, but the third escapes, a majority of the bank’s cash on his horse. The robbery leaves the bank near financial ruin, which could be fatal for both bank and Trinidad if the townsfolk demand their money. Caleb pledges to stay on as Trinidad’s sheriff until the final robber is caught, and the money is recovered.
The Big Showdown is a fine crime and Western hybrid. There is murder, fraud, and violence. The crime element features nicely placed and believable forensic crime scene interpretation by Caleb and the town’s doctor. There are gunfights, intrigue, and a lovable town drunk turned sober deputy. The prose is smooth as glass. The plot is interesting and while the master mind behind all the troubles in Trinidad is less than a mystery, how it plays out is satisfying and surprising.