"It Happened Tomorrow" by Robert Bloch 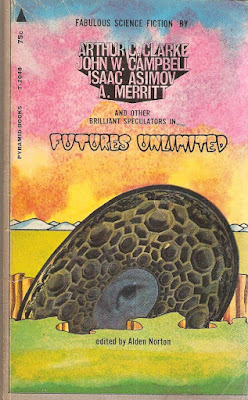 I’m a sucker for two things: 1) apocalyptic stories; and 2) Robert Bloch. When I find something that marries both, a Robert Bloch written apocalyptic story, I drop everything and read it immediately. A situation I found earlier this week when I turned to the table of contents of an old anthology, Futures Unlimited, edited by Alden Norton, and saw the Robert Bloch novelette, “It Happened Tomorrow”.
Dick Sheldon’s morning started in the usual way. Daylight. His alarm’s tattooing brutality. But then things go bad. The alarm won’t stop its ringing until he smashes it to pieces. The lights in his apartment won’t turn off. His bathroom water tap is stuck on. The street car door won’t open, and then the entire car refuses to stop. As does the elevator in his office building. The world’s machines have gone mad. Everything is running, out-of-control, and their human creators are scared, looking for somewhere to hide.


“It Happened Tomorrow” is vintage science fiction. It has big ideas presented in a simple, entertaining package. Originally published in Super Science Stories in June 1951, it is as prescient today—think about the recent talk of artificial intelligence’s peril to humanity from such luminaries as Stephen Hawking and Elon Musk—as when it first appeared. It’s as entertaining today, as it must have been seventy years ago, too.
A small story about a big subject. It follows the human world’s destruction as it happens from the viewpoint of Dick Sheldon, in a single city over a short period of time. A top-notch example of both classic science fiction and Robert Bloch. A writer who is unjustly forgotten and whose work seems ripe for a revival.


Futures Unlimited was published by Pyramid books as a mass market paperback in June 1969. It features an impressive list of contributors, including A. Merrit, Arthur C. Clarke, Isaac Asimov, Arthur Conan Doyle and others.
Posted by Ben Boulden at 2:30 PM

I ran a week of posts for his centennial, so you know I agree about his worth and significance....he and Fritz Leiber picked up their mentor HP Lovecraft's ball and moved considerably further down the field, writing better prose as well as doing more interesting things with his brand of existential horror...

Which works even better withut typos...