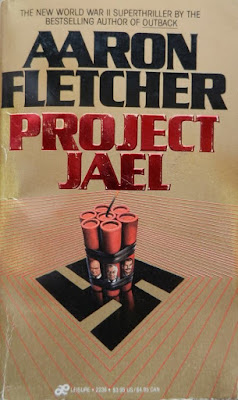 Aaron Fletcher is a writer I know nothing about. My internet searching determined he is an unknown quantity in the ether-sphere, too. I know his name is on the cover of the successful Outback historical series and he wrote a few suspense novels in the 1960s and 1970s, but otherwise…nothing.
Frank Keeler is a British MI-6 agent, cast in a broken mold of James Bond, with a history of getting the job done. Fresh on the heels of a successful mission in Cairo, Keeler is tasked with disposing of a Nazi plot to kill Franklin Roosevelt, Winston Churchill, and Josef Stalin at a secret summit set for Tehran in 1943. An assignment that is anything but easy since Keeler has to deal with the German spy apparatus, Abwehr, the Soviets, a German Brandenburg detachment led by a hate-filled and industrious Polish officer, and at least two beautiful women. One married, the other a former prisoner in a Russian gulag. It isn’t easy, but Keeler makes it look like another day at the office.
Project Jael is an enjoyable, overly long World War Two thriller, with a smoothly executed and easy to read style without many surprises or anything to raise it above the standard. An original paperback published by Leisure Books in 1985, it is a comfortable yarn that blends Jack Higgins’ The Eagle Has Landed and Ken Follett’s The Key to Rebecca without the originality of either. The Tehran setting is nicely rendered and the competitive nature of the intelligence services, especially between the British / American and the Soviets, is neatly detailed. An entertaining diversion, but not one that you should spend much effort seeking out.
Posted by Ben Boulden at 1:40 PM

This is definitely my kind of novel. Thanks for the review, Ben.

Sounds like something I would like, too, Ben. I'd not heard of Fletcher, either. And welcome to the FFB crowd!