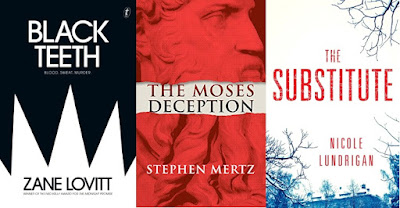 2017 has been a great year for reading. I finished 54 titles, which is two short of last year’s mark and six shy of 2015’s. The majority of the titles were fiction and my nonfiction reading tumbled to a scant few books.


I started 2017 with a single goal:
Read more non-fiction!
And failed miserably, and that same goal will be pushed forward into 2018.
My fiction reading is littered with the old and familiar. If there is an author in general, or a novel or story in particular, I like, I will read it over and over. While 2017’s reading was dominated by my obligations to Mystery Scene Magazine, I was still able to read some old favorites. I read four novels by Stephen Mertz, including his two latest titles Jimi After Dark and The Moses Deception and four novels by Australian author Garry Disher, all in his Hal Challis and Ellen Destry police procedural series. I re-read Don Pendleton’s Copp on Ice, Jack M. Bickham’s Dropshot (my sixth or seventh reading of this title), and Harrison Arnston’s The Third Illusion.
But I also read a bunch of authors new to me—21 in total—including impressive works by Jordan Harper (She Rides Shotgun), Nicole Lundrigan (The Substitute), Zane Lovitt (Black Teeth), Con Lehane (Murder in the Manuscript Room), and Stephen Gallagher (The Authentic William James).
And my reading list in 2017 featured a few favorites, which I whittled (with some difficulty) down to five titles. With that said, my five favorite fiction titles that I read in 2017 are:
5. The Big Book of Rogues and Villains, edited by Otto Penzler (Vintage Crime, 2017), is an anthology featuring 73 stories with either a rogue or a villain as its protagonist. The stories included were written from the Victorian Age to modern times. And every story is perfectly suited for its inclusion. My favorite is Bruno Fischer’s dark masterpiece, “We Are All Dead”. Read the Mystery Scene review.
4. The Authentic William James, by Stephen Gallagher (Brooligan Press, 2017), is a historical crime novel with an honest, ethical, and compassionate detective—Sebastian Becker, Special Investigator to the Lord Chancellor’s Visitor in Lunacy—at its center. The story moves from London to Philadelphia to Hollywood, but no matter where the action takes place it is well written, well researched, and very entertaining.
3. Sleep No More: Six Murderous Tales, by P. D. James (Alfred A. Knopf, 2017), is a collection of previously uncollected stories. The stories have a different theme than much of James’ work since the focus tends to be on crimes that are executed so perfectly that they are never solved and every tale is worth reading. Read the Mystery Scene review.
2. She Rides Shotgun, by Jordan Harper (Ecco, 2017), is a nourish masterpiece—ish, because there is a slender line of hope and redemption throughout—featuring a young girl, her fear, a teddy-bear, her convict father, and a drug gang on a path to both destruction and redemption. Read the Mystery Scene review.
1. Chain of Evidence, by Garry Disher (Soho Crime, 2008), is the fourth in his Hal Challis and Ellen Destry police procedural series set in the rural Mornington Peninsula southeast of Melbourne, Australia. Its theme is difficult, the abuse of children, but its execution is so precise, without ever falling into the salacious, that I didn’t want the last page to arrive. Read the Gravetapping review.

Ben, I have never succeeded in my goal to read more nonfiction every year, though 2017 was a particularly bad year for reading, writing and blogging for me.