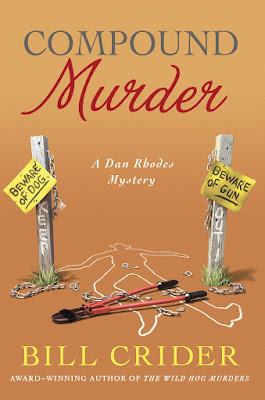 Compound Murder is the twentieth novel featuring Blacklin County, Texas Sheriff Dan Rhodes. The series started in 1986 with Too Late to Die, and the latest title (number 22 in the series), Between the Living and Dead, is scheduled for release in August. Blacklin County’s population is small, but the characters and crimes are anything but.
It opens with a burglary at the Beauty Shack. The thief broke the restroom window, and stole the Shack’s latest inventory items—“…hair extensions and wigs. Made from real human hair,” which have an impressive street value. Sheriff Rhodes’ report and scene investigation are interrupted by another call. A corpse is in the parking lot of the community college. When Rhodes arrives the scene is being handled by Dr. C. P. Benton; “Seepy” to everyone who knows him. Dr. Benton isn’t a deputy, but he thinks he is, and he is pretty sure the dead man was murdered—
‘You’re sure it’s a crime scene?’
‘That would be my professional judgment as a graduate of the Citizens’ Sheriff’s Academy.’
As it turns out Seepy is right, and Rhodes quickly identifies a handful of suspects. The victim was an English professor, and not well liked. The primary suspect is a student named Ike Terrell. Ike is a suspicious character simply by relation. His father is Able Terrell who is the leader of the county’s local survivalist group. He has a compound, guns, and rumors of more guns. The investigation is far from clear, and the plot is littered with twists.
Compound Murder is smooth, humorous, and criminal. It is a rural police procedural; mostly whodunit with a shimmer of hardboiled. The humor is secondary to the well-crafted mystery, and acts as a foil to the seriousness of the crime. It is developed in the eclectic oddball characters—the Abbot and Costello act of the police dispatcher and jailer, and Rhodes’ straight man-like reaction to it—and the dialogue, which hums with misunderstanding. The stolen hair is a hot topic, and provides a few well-placed laughs—
‘That’s not a head,’ Rhodes said. ‘It’s a wig stand. With hair on it. Real human hair, too, I’ll bet.’
‘He scalped his victim?’
Buddy’s voice trembled. Rhodes didn’t know if the cause was excitement or disgust.
‘No,’ Rhodes said. ‘His victim was Lonnie Wallace.’
‘It was Lonnie Wallace’s body at the college?’
Rhodes wondered why all his conversations seemed to go this way. Maybe it was somehow his own fault.
Mr. Crider nicely develops the setting—the decaying main streets of Blacklin County’s small towns; the heat; the country’s expanse. The places, and many of the characters, flow from novel to novel developing a strong sense of place in each, and the series a whole. There are also a few insider jokes: Joe Lansdale’s name shows up twice. Once as a karate instructor, and again as a novelist.