RIDERS ON THE STORM by Ed Gorman 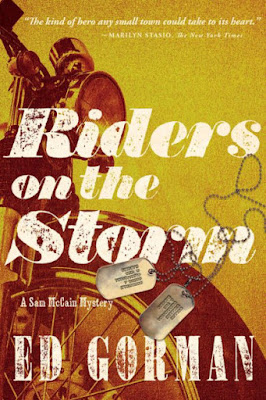 Ed Gorman’s Sam McCain—small town lawyer and investigator—is at the top of my list for private eye serial characters. He is charming, sarcastic, funny, and cool in an off-hand if worried manner. He is an outsider. He grew up in the poor section of Black River Falls (a fictional rural Iowa city) called The Knolls. A place he escaped with a law degree, but a place he can never leave behind because he understands the people. The struggles. The poverty and hopelessness. But mostly, that scared little boy from the wrong part of town is still in him. Worrying. Doubting.
There were ten Sam McCain novels, and the final, published by Pegasus in October 2014, is one of the best. It’s also the darkest. Even its title, in honor of the song by The Doors, is dark—Riders on the Storm. It’s a direct sequel to Ticket to Ride, and it finds an older, more world-weary Sam McCain in 1971, America. Vietnam is full-tilt, and, as Bob Dylan wrote a few years earlier, “The times they are a-changin’.” Sam, in a short stint with the Army, is involved in car crash and for five weeks doesn’t know his own name—
“My name is Sam McCain. There was a time eight months ago when I didn’t believe that. When both a neurosurgeon and a psychologist visited me every day and tried to convince me of it.”
There is a mystery, and a good one too, but the story is Vietnam—not the shooting and killing in Southeast Asia, but rather its impact at home. Will Cullen, a veteran who struggles with his actions in the war, is accused of killing a local businessman and budding politician named Steve Donovan. Donovan publicly, and maliciously, beats Will Cullen at a political event because Will signed on with the antiwar organization “Vietnam Veterans Against the War.” The next day Steve Donovan is found murdered, and the most likely suspect is Cullen. A suspect both Sam and Will’s wife are dubious of, and Sam spends the rest of the novel trying to clear Cullen as a suspect.
But proving Cullen’s innocence is less than easy. Gone is the incompetent and laughable Chief of Police Cliffie Sykes Jr. and in is the professional and competent, “please call me Paul” Chief Foster. Foster is certain of Cullen’s guilt, but he is seemingly fair and uncomfortably considerate of Sam and Cullen’s wife Karen. But Sam is equally certain of Cullen’s innocence and proving it becomes very personal.
Riders on the Storm is Sam McCain, but darker and more intense than the earlier entries in the series. Mary Travers is back with two young daughters from her failed marriage. Her return is good for both her and Sam. Jamie Newton, Sam’s cutely incompetent secretary is also back, but different. Older, very competent, and, unfortunately, no longer referring to Sam as “Mr. G.” There are more characters than Cliffie Sykes Jr. missing—Judge Esme Anne Whitney is nowhere to be seen, and Mrs. Goldman, Sam’s landlord, is AWOL, as are all the colorful Sykes’ relatives. In their place is a darker, more introspective Sam McCain whose youthful exuberance is tempered by time and experience. He is no longer a young man, but he is a more complete man.
Riders on the Storm is different from the previous Sam McCain novels, but as any good character and series, the change is inevitable and welcome. It is the Seventies after all. The age of well-earned cynicism—big government, big business, and all the rest. It’s Sam McCain’s arrival to maturity. Deep with meaning, disappointment, and paradoxically, fulfillment. Even more, it is a very fine private eye novel.

I skimmed your review, Ben, because I want to read this book someday. But I can tell from what I did read that I am going to like it. Thanks for the boost for getting me back to reading this series.

Very find novel indeed, Ben, and my favorite mystery series, and a very fine review and retrospective. Stoked a sadness knowing there will be no more.

This series is one of my all-time favorites. Sam McCain was Ed Gorman’s best (Semi-autobiographical?) création IMHO. I have been saving this one to cherish for a couple of years now. It’s as if not reading the novel allows me to ignore the reality that it is the last in the series...
Thanks Ben