THE DRAGON MAN by Garry Disher 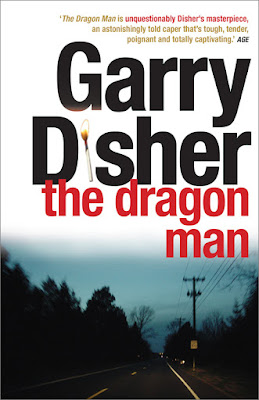 The Peninsula is “a comma of land hooking into the sea southeast of Melbourne” in Victoria, Australia. A tourist destination known for beaches, wineries, and coastal towns. It is sparsely populated, beautiful, and, recently, the stalking ground for a sex killer. One woman was found dead on the Old Peninsula Highway—a lonely road treading the western coast of the peninsula, cutting south and west—and another has disappeared.
Inspector Hal Challis, the regional homicide specialist, is assigned the investigation. The search is headquartered in the fictional city of Waterloo. A city with a small police force, and an even smaller CIB—Criminal Investigation Branch—squad. The killer is careful and clean. The only significant lead is the track of a rare brand of tire near the dumping site of a victim—
“There was no semen. The killer used a condom. There were no fingerprints. The killer used gloves. What he’d left on his victims were absences, including the absence of life.”
The Dragon Man is a beautifully written police procedural. The main plot is supplemented with crisscrossing subplots. An overzealous constable. A series of house burglaries. A frightened woman trading sex for drugs. And Hal Challis. An almost broken, flawed man. A man who is married to a woman who, along with her lover, attempted to kill him. A man who is underestimated by most, and a man who is likable, and, at times, real.
“He drove on. Christmas Day. With any luck, someone would find a body and free him from Christmas Day.”
The setting is rendered with care, and the small details—a bucket in the shower to catch the water for additional use in the garden, dry draught-like conditions of mid-summer heat, herons feasting on mosquitoes—create a real world believable place. A place that is familiar and exotic. Mr. Disher also plays with morality. The police often behave more consistently with the criminals they chase. One steals evidence from the police locker. Another attempts to blackmail a woman for sex during a traffic stop.
The Dragon Man is the real deal. It is the first novel (of seven, so far) featuring Hal Challis and Ellen Destry. It is something of a cross between literature and police procedural. It is rich on detail, economical, meaningful, and a wonderfully entertaining novel.