SOME DIE HARD by Stephen Mertz 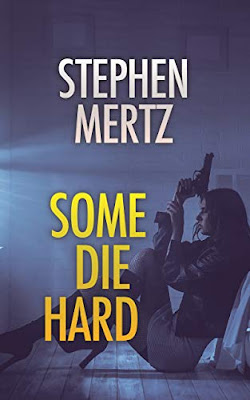 Some Die Hard is Stephen Mertz’s first published novel. It appeared as a paperback original in 1979 from the low-rent New York publisher Manor Books, as by Stephen Brett. A pseudonym, at least the surname—according to an informative and interesting Afterword in the recent Rough Edges Press edition—that was a hat-tip to Brett Halliday. The same Brett Halliday behind the fictional private eye Michael Shayne.
Rock Dugan, a former stuntman who gave up Hollywood for private detective work and Denver, is returning home—after tying up an employee theft investigation—from the fictional Langdon Springs, Colorado. Sitting next to Dugan on the bus ride home is a nervous man who, once they arrive at the depot, panics and bolts, stumbling into Dugan before dashing into traffic where he’s hit and killed by a taxi. The police think the man’s death is an accident, an opinion Dugan doesn’t share because the man expertly passed an envelope to him in the confusion. The envelope’s contents are for Susan Court who, with a dying millionaire father changing his will at the last minute and a no-good brother, hired the nervous man, also a P.I., to uncover a few secrets.


Some Die Hard is a hardboiled locked-room murder mystery—those impossible crimes where the whodunit is less important than the howdunit (and I’m not even going to tell you who the victim is). Its prose is smooth, although not as crystal as Stephen Mertz’s latest work, and the story is enjoyable and easy. Easy to read, rather than easy to guess. Dugan is likable and hardboiled. He is big-fisted, clever and carries that sacred Private Eye code. A knight-errand more concerned with justice than law.