Thrift Shop Book Covers: "The Name of the Game is Death"

The Name of the Game is Death, by Dan J. Marlowe, was a paperback original published by Gold Medal in 1962, but the edition that caught my eye is the Black Lizard paperback published in 1988. The dark background and muted colors make for a sinister atmosphere, which perfectly match the dark story. The artist: Kirwan 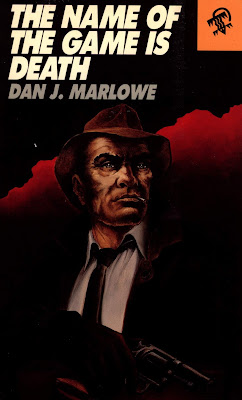 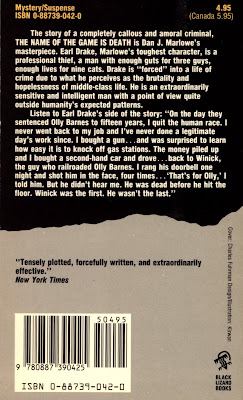 
From the back seat of the Olds I could see the kid’s cotton gloves flash white on the steering wheel as he swung off Van Buren onto Central Avenue. On the right up ahead the strong late September Phoenix sunshine blazed off the bank’s white stone front till it hurt his eyes. The damn building looked as big as the purple buttes on the rim of the desert.

The Name of the Game is Death is the first appearance of Earl Drake; a middle-lass mand who turned violent crime as an escape of the “hopelessness of middle-class life.” The follow-up novel, One Endless Night, is the second part of a single seamless story. Drake was revived for Marlowe’s ten “Operation” novels.
Posted by Ben Boulden at 9:00 AM