Water Hole, by Julian Jay Savarin, is a Gordon Gallagher thriller. There were at least five in the series and Water Hole is either the first or second. It was published as a hardcover by St. Martin’s Press in 1982. The edition that caught my eye is the Harper paperback published in 1993. A lizard, a Mac-10, binoculars, a broken camera, sand, and what looks like pink Fun Dip makes the cover work. The artist: Unknown (to me at least), but the photographer is Herman Estevez. 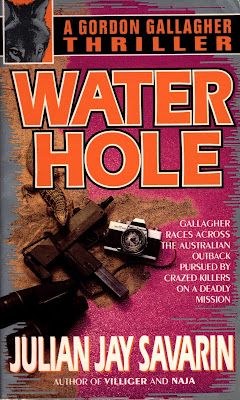 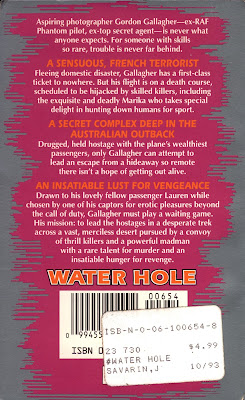 
The end of the gangway rested on a pier in Taormina, Sicily. A man left a gleaming ocean-going yacht, walked down unhurriedly. He looked at peace with the world. The yacht belonged to him.

Julian Jay Savarin wrote, by my count, 35 novels between 1979 and 2007. He is a musician, fronting the band Julian’s Treatment. According to his entry in Guide to Literary Masters & Their Works, by Diana M. Casey:


“Very little is known about author Julian Jay Savarin’s life. He was born in Dominica, moved with his family to the United Kingdom in 1962, earned a degree in history, and settled in England.”
Posted by Ben Boulden at 6:15 PM