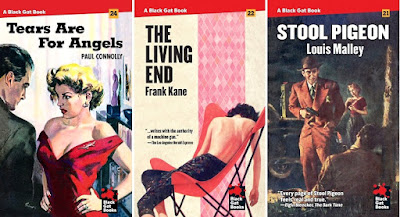 Stark House Press and its imprint Black Gat Books are my favorite classic crime publishers. Black Gat publishes beautiful mass market paperback editions, usually featuring the art from the original paperback. A new title comes out about every three months. Here are a few of Black Gat’s latest titles are:

Tears Are for Angels, by Paul Connolly (originally published in 1952 by Fawcett Gold Medal).


When Jean finds Harry London, there isn’t much left of the man. He lives alone in a shack, spends all his time drunk on moonshine. He’s forgotten about shaving, washing. All he does is shoot at empty cans of beans…and pretends he’s shooting Dick Stewart…Jean is there to find out what happened to her friend, Lucy. The last letter she received from her, she was happily married to Harry, living on his farm, settling into her new life. Now she’s dead, a suicide. What happened to Lucy? And what has turned her loving husband into this brooding wreck of a man, whose sole reason for living is to take revenge against a man who once did him wrong…


The Living End, by Frank Kane (originally published in 1957 by Dell).


Eddie Marlon is just a kid with a song he wants published, another city kid with dreams of being in the music business. His song is nothing special, but Eddie gets a tip that a local radio station needs help on the early morning shift. Marty Allen hires him to line up the records for his show. But the way Eddie sees it, Marty is a square—he doesn’t go for the bucks that are to be had charging A&R guys to get their tunes on the air. Eddie must have been born lucky because one night Marty needs Eddie to help him get the station boss out of a jam. Then they owe him. And when it’s time to collect, Eddie is right there with a plan. He wants his own time slot and he wants to put on free shows with all the big talent, who will naturally play for free to get the air time. Eddie’s got big plans alright. Because now it’s his shot at the top—and if you want to be on Eddie’s show, you’re going to pay for it!


Stool Pigeon, by Louis Malley (originally published in 1953 by Avon).


It’s Christmas Eve in Little Italy, and Vince Milazzo is called in to investigate the murder of Tony Statella, shot in the head outside of Rocky Tosco’s restaurant. Milazzo has got a personal grudge against Tosco that goes back to their childhood. He knows that somehow Rocky is involved, and is determined this time to bring him down. Even though the murderer turns out to be a kid who was avenging the honor of his sister, Milazzo keeps pushing the Chief for more time. He knows that Rocky is guilty of something, if only he can find someone to rat on him. But every stool pigeon Milazzo talks to tells him the same thing—they don’t know from nothing. Now Milazzo has until midnight to find the connection … or this case might very well be his last.