THE WOLF IN THE CLOUDS by Ron Faust 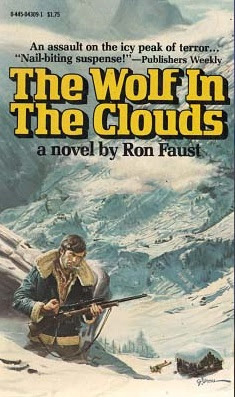 The Wolf in the Clouds is Ron Faust’s second published novel. It was originally published as a hardcover by Bobbs-Merrill’s Black Bat Mystery imprint, then as a paperback by Popular Library, and recently as a trade paperback and ebook. It is, like much of Mr. Faust’s early work, a relatively simple adventure yarn with a poetic lilt that makes it a little more.

A small town in rural Colorado is under siege from a slow moving blizzard and a rampage killer. A killer who shot several people at a nearby ski resort and is now hiding in the rugged Wolf Mountain Wilderness Area. The storm trapped three college students skiing in the shadow of the Wolf—a high, unforgiving mountain peak—and two forest rangers brave the freezing temperatures to mount a rescue. The rangers, Jack and Frank, find the skiers safely holed up in a small cabin, but they also find the killer; a man named Ralph Brace whom Jack once considered a friend, but now realizes he never knew at all.


The Wolf in the Clouds is an entertaining, smoothly written adventure novel. It is written in first person from Jack’s perspective and the narrative includes ideas larger than the story. The complexity of public land use is only one and it is as relevant today as it was forty years ago. The prose is both complex and simple; easy to read, but with a texture and feel of something almost beautiful—


“Roof timbers creaked, the last light faded from the windows, the stone walls exhaled a new, acid cold. The long winter night was here; we had fourteen or fifteen hours until dawn.”
The story lacks the complexity of Mr. Faust’s later novels and the protagonist, Jack, is shaded nearly cold. He is aloof, even in an early scene with his wife, and something of an outsider with both the Forest Service and the townsfolk, which is forgivable since everything works so well—setting, plotting, character. The Wolf in the Clouds isn’t in the top-tier of Mr. Faust’s body of work, which is reserved for his final six or seven novels, but it is still pretty damn go