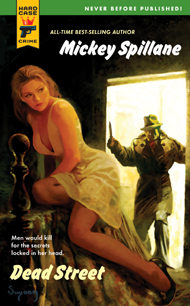 Hard Case Crime has announced a new, never before published Mickey Spillane novel titled Dead Street. It will be released in November, 2007. Mickey died in July, 2006 and according to Hard Case Crime editor Charles Ardai he left one completed crime novel--Dead Street--and several strands of unfinished Mike Hammer novels. Rumor has it Max Allan Collins has been hired by Spillane's estate to finish the Mike Hammer novels.

Spillane was the bestselling author of the Twentieth century--yes children, he even out sold Stephen King--and he is best known for his hardboiled Mike Hammer novels, which were made into a myriad of films and televsion series'. None of them very good.

I have never been a huge fan of the Hammer novels--they are just a bit too hard boiled for my taste, but I have to admit I am excited for Dead Street to make it to my local bookstore. The Hard Case Crime website description is:

For 20 years, former NYPD cop Jack Stang has lived with the memory of his girlfriend’s death in an attempted abduction. But what if she weren’t actually dead? What if she somehow secretly survived—but lost her sight, and her memory, and everything else she had...except her enemies?

Cool, eh? At least the cover art is.