THE DEFENDER by Bill Mesce, Jr. 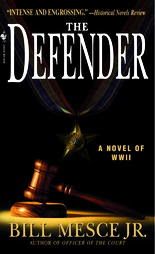 It's another busy week. I'm in the last week of classes; finals are quickly approaching--next Wednseday at about 11am I'll walk out of the testing center for the last time. I hope. And needless to say the week is slipping by, and I don't have anything to post. So here is a review of Bill Mesce's legal / military thriller The Defender. This review originally went live on January 26, 2007, and since most of you have found Gravetapping since then, it very well may be new to you. If not, come back in a few.

This nifty little legal thriller is advertised as “a novel of Word War II,” and it doesn’t disappoint as either a historical novel or a legal thriller. Lieutenant Dominick Sisko has been charged with disobeying an order and cowardice. Sisko took his unit off the offensive and retreated down hill 399 against the order of a senior officer. His defense? The commanding officer, killed in the offensive, gave him the order to retreat.
Lieutenant Colonel Harry Voss, a family friend to Sisko, is called in by the Judge Advocate General to act as the defense. The court martial is rushed, and Voss finds himself running against the clock, the prosecutor and the truth. The story is more than it seems, and Voss is uncomfortable with both the over zealous attitude of the prosecutor and the facts of the case. The characters all have divergent motives, and Voss is faced with more than just a normal defense. He his faced with his own conscience.
The Defender is a fast-paced, and thrilling novel. Mesce’s writing shines in the courtroom scenes—the dialogue is crisp, realistic and the story his characters testify is engrossing. The characters have the feel of realism without an overbearing reliance on description and back-story. The setting is well drawn with tight, understated images. The Defender is a winner, and I enjoyed every page.
Posted by Ben Boulden at 10:12 PM