"The Shadows, Kith and Kin" by Joe R. Lansdale 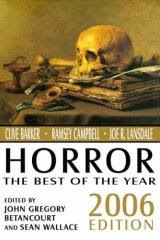 Joe R. Lansdale has near legendary status in the horror world—he has won an astonishing six Bram Stoker Awards and the British Fantasy Award. Three of his stories have been translated to the screen—the wonderful Bubba Ho-Tep, and Incident On and Off a Mountain Road for the Showtime series Masters of Horror, and The Job. He has published an impressive amount of short stories and he is also an acclaimed mystery writer.

Which makes me even more embarrassed that I haven’t read much of Lansdale’s work. I actually own a few of his novels including his most recent release Lost Echoes, but they haven’t arrived at the top of my to-be-read pile. So when I came across his short story “The Shadows, Kith and Kin” in the 2006 Edition of Horror: The Best of the Year I decided I better read it. And I’m glad I did.

“The Shadows, Kith and Kin” is the story of a lonely man. He is unemployed, married to a woman who no longer loves him, and even worse, lives with his in-laws. He sleeps during the day while his wife is at work, and at night he sits out on the porch and watches the shadows—shadows that he begins to associate himself with. To tell any more of the plot will spoil the story.

“The Shadows, Kith and Kin” is told in first person. The narrative is seamless. The pace is near perfect, and the prose is, at times, beautiful. One passage was particularly haunting:

Lying in bed later that night I held up my hand and found that what intrigued me most were not the fingers, but the darkness between them. It was a thin darkness, made weak by light, but it was darkness and it seemed more a part of me than the flesh.

The story builds slowly. The first half is dark, haunting, and surreal. Then Lansdale changes gears and swiftly takes the story to a place I wasn’t expecting. The narrative moves from introspective to explosive—the main character, while not changed intrinsically is forced into an action that changes his world.

“The Shadows, Kith and Kin” is a story that packs a wallop. It is what horror should be: meaningful, haunting, scary, and damn fun. It’s impact lasts well beyond the final page, and if this is an example of Joe R. Lansdale’s short stories, I need to read more of them.

“The Shadows, Kith and Kin” was originally published in the anthology Outsiders edited by Nancy Holder and Nancy Kilpatrick; it also appeared in Horror: The Best of the Year 2006 Edition edited by John Betancourt and Sean Wallace; it is also in Joe R. Lansdale’s most recent collection Shadows, Kith and Kin published by Subterranean Press in 2007.
Posted by Ben Boulden at 4:33 PM