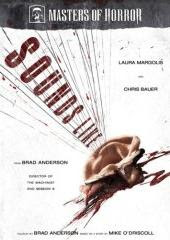 I watched an episode of Masters of Horror—a Showtime anthology series—a few weeks ago that has stayed with me. The title: “Sounds Like.” It was directed and written by Brad Anderson—he also directed the 2001 horror film Session 9; a film that really scared me, and absolutely terrified my girlfriend. His work since has mostly consisted of television episodes; he directed an episode of The Shield, Surface, and two episodes of HBO’s overrated series The Wire.

“Sounds Like” is a quiet film—it tells the story of Larry Pierce, a manager at a customer service call center who, at the death of his son, develops hypersensitive hearing. He can hear whispered conversations across crowded rooms; small sounds that we all ignore—dripping water facets, the clinking of glassware, nervous fingers playing on cloth and tables. He can literally hear everything, and at first it doesn’t bother him, but as the film progresses Larry becomes more and more isolated from the world. He is more an observer of his surroundings than a participant, and the crushing noise of humanity quickly threatens his sanity.

“Sounds Like” is a terrific film that drips with melancholy, isolation, rage, and a forbidding loneliness that exists in us all. Chris Bauer, who plays Larry, is perfect for the role. He exudes tired desperation. The sadness of the character seemingly haunts the screen, and as the film moves toward its climax the audience can’t help but feel a mixture of empathy and horror at what the man becomes.

Brad Anderson has created an atmospheric film that not only tells a great story, but also says something about society, loss, and the human condition. "Sounds Like" is the best episode of the very uneven Masters of Horror series, and very much worth the price of rental.
“Sounds Like” is based on a short story written by Mike O’Driscoll.
Posted by Ben Boulden at 10:40 AM