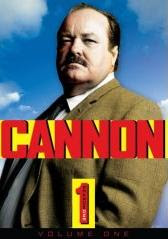 I discovered a new television series yesterday. It isn’t currently in production, but it is new to me. It stars William Conrad—the guy I clearly remember from Jake and the Fatman (he was the Fatman)—and it was produced from 1971 to 1976; according to IMDB there were 120 episodes. The title: Cannon.

Frank Cannon is a former cop turned private eye who is esteemed as one of the best and most expensive in Southern California. He loves food, and amazingly does his own leg work, most of it in a gigantic Lincoln Continental. He talks to the witnesses, scouts the locations and gets thumped once or twice an episode doing one or the other. The storylines, of the few episodes I’ve watched so far, are top-notch. The mystery is intriguing, the action solid, and it is cemented together with a good deal of humor.

The amazing thing—besides Cannon being a terrific show—is that each episode runs about 50 minutes; a little better than the 38 to 43 minute shams the networks are producing today. The shows that demand TiVO to watch without cursing the advertisers and producers, no matter how good it is. Was that a rant?
Posted by Ben Boulden at 12:47 PM