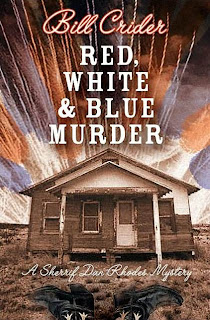 Dan Rhodes is the Sheriff of the rural Texas county of Blacklin. Its residents are what one would expect—unique, strange, humorous, friendly, and, in a few cases, dangerous. In Red, White, and Blue Murder Rhodes encounters them all, but the most memorable are those who are, in varying shades, dangerous.

The novel opens smack in the middle of a midsummer heat wave that has stalled over Blacklin. It is so dry and hot that Rhoades doesn’t need an excuse to keep from watering his lawn, which also acts as a great way to get out of mowing it as well. But even with that small benefit Rhodes is downright tired of the heat and he has the notion of shooting the next person who asks if it is hot enough for him.

It doesn’t help matters that the inmates of the county jail are grumbling about a lawsuit because the jail is so hot, and a rookie reporter for the local rag thinks she has him and the County Commissioners cold on a corruption charge. But things really begin to heat up when a local man is burned to death in a house fire that looks like arson.

Red, White, and Blue Murder is the first of Bill Crider’s novels I have read and it was better than I imagined. It is a unique blend of whodunit and American style hardboiled—probably something like 75% of the former, and 25% of the later. The whodunit part is the comfortable setting, the townspeople—pestering, conniving, kind, and likable. It is a place the reader would love to visit, and in a literary manner, it is a place you have been before, but not for a very long time.

The hardboiled portion is the manner Mr. Crider develops the mystery and action. The prose is gentle, but in a stark and economical manner. Sheriff Rhodes is a strong and independent character who is less than perfect. He plays the stumbling small town lawman routine perfectly. The mystery and action seemingly overwhelm him a few times, but his tenacity, stubbornness and implicit strength pull him through each time. He is the kind of character that keeps the reader involved and invested in the story.

In short, Red, White, and Blue Murder is a terrific mystery tale. The story is entertaining, humorous and surprising. The action is invigorating and the setting is pitch-perfect. The characters are perfectly cast in roles that range from the humorous and odd to violent, shady and downright mean.

A NOTE: Red, White, and Blue Murder is the twelfth novel to feature Dan Rhodes and there have been three released since (with another due out in 2009), which means Blacklin County is a place that can be visited again and again.
Posted by Ben Boulden at 11:52 AM

Thanks for the kind words, Ben. As I always say, the sheriff and I can use all the help we can get!

Nice review. I always make it a point to stop by Blacklin County. I've missed a few of the shorts along the way, but none of the novels.

And by the way, if your readers prefer to flip the percentages, they should investigate Crider's Truman Smith series.

Bill: No problem. Thanks for writing it. A little distraction is always a good thing, and I had as much fun with RED, WHITE, AND BLUE MURDER as I've had with a novel in some time.

Benjie: Blacklin County is on my official "visit" list now. And I need to look up a Truman Smith novel. I found a copy of Crider's HOUSTON HOMICIDE at my local library and it's patiently waiting for its turn next to my lamp table.