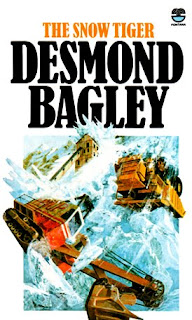 Desmond Bagley was one of the first thriller writers I discovered. I found his terrific novel Flyaway in a paperback exchange as a teenager and devoured it in only a few sittings. I can still remember reading it on a warm August afternoon on the back porch of our house; a gentle breeze in the air and the quiet thrum of classical music in the background. I was in the African desert right along with the protagonist, and I absolutely loved it. I spent the next several years hunting—pre-Internet era—down copies of his other thrillers and while I didn’t find them all, I found enough to know that his work was one of the standards by which all other thrillers of his generation should be judged.

Desmond Bagley was born in England in 1923 and spent nearly twenty years of his adult life in southern Africa—the better part of it in South Africa where he worked as a journalist and wrote his first novel The Golden Keel.
Posted by Ben Boulden at 12:31 PM