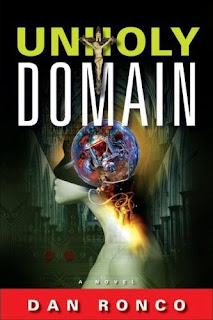 The year is 2022. The world economy has been destroyed by a lethal computer virus called PeaceMaker. It wiped out the economic infrastructure of the Internet and its ancillaries. The government over-reacted to the crisis by banning the development of most new technology, but the world population yearns for that technology, which has created a vast and powerful black market for everything from computers and software to robots.

There are three major players—the government, which tends to be a puppet of the other two players, an organization called The Domain—a group of scientists, gangsters, and business-types who create, manufacture, and distribute technology on the black market—and the Church of Natural Humans, which is a militant group opposed to all technology. The battle for dominance is played-out on an international scale, but it is interspersed with the story of David Brown, the son of the creator of the PeaceMaker virus, as he desperately tries to uncover the truth of what his father did and why he did it.

The plotlines neatly converge at the climax and overall the story is interesting, exciting and quick. The characters are under-developed, but each fulfills its purpose within the scope of the story. Mr. Ronco does an admirable job of creating the rivalry between the competing gangs. The Church of Natural Humans is developed as nothing more than an ideological terrorist group. This is best illustrated by the inane and mind-numbing prayers and chants—My mind and body are human. My soul has been altered by technology. We will destroy the Devil and protect Earth.

The Domain is cast in a marginally more favorable light, but it also has its share—most of the members really—of thugs, tyrants, crooks, and would-be despots. Interestingly the most human and likable of the characters in Unholy Domain are the robots built by The Domain. They have a limited role in the novel, but they are likable with an innocent grace and pure emotion.

Unholy Domain is a mixture of science fiction and modern thriller, and it has the strengths and weaknesses of both. The weaknesses: The plot and motivation of the characters is loose and at times—although not often—the technology and back story bog down. The strengths: It has the fast pace and plotting of a thriller with the insight of a social based science fiction tale. It contains some interesting insights into both modern religion and technology. There are no clear moral judgments made, but rather it leaves the reader to decide which power is the lesser evil.

Unholy Domain will not appeal to everyone, but if you enjoy a morally ambiguous social science fiction tale mixed with a jolt of James Patterson-style thriller you will likely find it pretty darn intriguing.
Posted by Ben Boulden at 12:32 PM