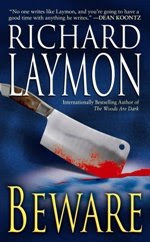 I have a love-hate relationship with the work of Richard Laymon. I mostly really enjoy his work, but every so often one comes along that makes me growl and wish he'd done a re-write or two. A few of his best are In the Dark, The Travelling Vampire Show, One Rainy Night, and Night in the Lonesome October. But there are also a few that just don't quite measure up to his usual standards; Come Out Tonight and To Wake the Dead are good examples of Laymon's mediocre stuff.

Now don't get me wrong, I've never ran into a Laymon novel that was terrible. Everything he wrote is readable and entertaining, but his good stuff is so good that it spoils the reader and makes the not-quite-so-awesome stuff a little disappointing. Sometimes very disappointing. But Leisure has another Richard Laymon reprint scheduled later this month--just in time for Halloween--that sounds terrific. The title: Beware! It was originally published in 1985 and has been a very difficult title to find in the States. It is scheduled for release October 28. Here is the description on the Leisure website:
Elsie knew something weird was happening in her small supermarket when she saw the meat cleaver fly through the air all by itself. Everyone else realized it when they found Elsie on the butcher’s slab the next morning—neatly jointed and wrapped. An unseen horror has come to town, leaving a blood-drenched trail of carnage in his wake. And his victims are about to learn a terrifying lesson: what you can’t see can very definitely hurt you.
Posted by Ben Boulden at 2:41 PM