VENGEANCE IS MINE by William W. Johnstone & Fred Austin 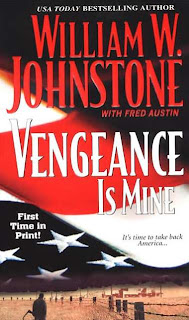 John Stark is an aging Texas rancher. He is a veteran of Vietnam and a man who is concerned about the illegal drug trafficking across the US-Mexican border. His concern escalates to outright war against the traffickers when his friend and fellow rancher is brutally tortured and murdered by a Mexican drug cartel. His crusade takes him across the border to a wild strip-club where he finds a few of the men responsible for the murder and then his war quickly finds him. He enlists the help of a his neighbors and hunkers down to face everything the Mexican gang has to throw at him—and it includes hired guns, crooked cops, and a government that is less than pleased with his fight.

Vengeance is Mine is an enjoyable thriller that is well-paced and interesting—I learned a little about Texas geography and even something about US-Mexico border security. The protagonist is an interesting mix of larger-than-life hero and flawed gentleman. He slips from exuberant competence to self-doubt and blame without seeming weak or contrived. The style is something just a little different from most modern thrillers—it has a certain hardboiled and gritty mentality—

“The air was thick with tobacco and marijuana smoke, along with sharp tangs of whiskey, beer, and cheap perfume.”

The plot is interesting and well executed. Its major weakness is the abundance of over-the-top political overtures—the sum of the United States’ (and the world’s) problems can be blamed on a cabal of liberal Senators. An argument that even in the subtext of the novel felt tired and paranoid, but if you can get past that Vengeance is Mine is really a pretty damn good novel.

A NOTE. As a teenager I loved the idea of Johnstone’s novels; particularly his adventure stuff. It was always populated with angry survivalists who had the foresight and courage to see the coming disaster and survive it, but while the plots intrigued me the execution and style always left me disappointed and wanting. I must have started ten or more of his novels before I completely gave up on his work.

When I heard the novels under his byline were being written by other writers I was intrigued. These “collaborations” seemed to be an ideal solution to the Johnstone problem—all promise and no delivery—and some of them might even be pretty good. Vengeance is Mine is certainly cast from the Johnstone formula: the lone man as both outcast and savior of society mixed with a bevy of right-wing propaganda. The difference: It delivered. The quality of the writing was significantly better, the tone and style was more lucid and interesting, as was the execution of the plot.

The point? Besides abusing a dead man? Vengeance is Mine is worth taking a look at. It will appeal to fans of the original writer as well as new readers who avoided Johnstone's writing, or were never introduced to it. I know I plan to read another one.

When I re-read this review I was struck that I was a little harder on Mr. Johnstone's work than I intended to be. I didn't mean to question his talent or the product he produced other than to say that, subjectively, I was generally a little disappointed in it. One of the reasons is that I read one of his novels in the early-1990s and absolutely loved it; its title What the Heart Knows. It was a beautifully written love story very much like The Bridges of Madison County. A type of story that I don't generally read, but Johnstone's take on the "love-lost" story was compelling and interesting and I have judged the rest of his work based on this novel. Something that is probably unfair to both the writer and his work.
Posted by Ben Boulden at 11:25 AM