LINE OF FIRE by Donald Hamilton 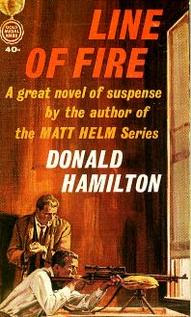 Paul Nyquist is an expert shot. He owns and operates a gunsmith shop in Capitol City and his evenings are spent with a local gangster—Carl Gunderman. A man with whom he shares a dark secret and also a man who is, while not a really a friend, the only person Nyquist feels comfortable with.

The novel opens with Nyquist at the window of an upper floor of an office building. He has a rifle in his hand and a jumpy low-level tough guy at his side. It is a warm day. And when the target walks from the building across the street Nyquist carefully takes aim and fires. The man goes down hard, and unexpectedly, the door of the little office the two men occupy opens by the hand of a young woman who asks: “What was that awful noise?”

The job goes sour in a hurry and Nyquist is forced to take an action he isn’t proud of. The rest of the novel is Paul Nyquist’s dangerous and unhealthy attempts to get himself and a witness out the quagmire of a favor gone very badly wrong. And it very well may be the end of not only Nyquist’s relationship with the gangster, but the end of Paul Nyquist.

Line of Fire was first published in 1955 and it has all the hallmarks of the era; it is dark, sparse, quick and very entertaining. It is filled with an abundance of technical shooting details. The plot is thrilling—there are more than a few jolts and twists that I didn’t see coming. There is murder, betrayal, suspicion, and even a dab of friendship, tenderness and love.

The prose is tight and very readable:

“Four hundred yards is a long way, even for a bullet traveling better than twice the speed of sound. The gun came back at me with authority, throwing the scope up off the target; the room shook with the blast of the .30-caliber cartridge.”

The action is well-scripted and perfectly paced within the bullet-fast plot. The dialogue has the feel of authenticity, and the dark sorrow and regret of the protagonist is done without the self-pity that would turn the reader off. The truly amazing element of the novel is the setting and description. Hamilton creates a detailed atmosphere with seemingly minimal effort. The reader is in the room with Nyquist when he pulls the trigger and that tangible sensibility and realism is carried to the final page.

Line of Fire is, without a doubt, the best novel I have read in 2009—some 54 years after its first publication. I have read a handful of Donald Hamilton novels, mostly from his Matt Helm series, but I have never had a great affinity to his work until this minor masterpiece.

Everything worked; the plot, the characters, the dialogue, the action, the setting, the description. It is a novel that packs more punch than any modern thriller I have read and it comes in at a shockingly short 159 pages. And I can tell you that Donald Hamilton is now on my watch list. Permanently.
Posted by Ben Boulden at 9:47 AM

I think I've read all of the late Mr. Hamilton's fiction and Line Of Fire is by far my favorite, although The Steel Mirror and The Two Shoot Gun are close. I can hardly think of a better candidate for a film noire than this novel. Why it wasn't snapped up by a movie studio eludes me. I can even see John Payne as Nyquist.

In my view, the other Hamilton book at the top of ANY list must be Death of a Citizen. Both leave a crisp feeling of reality. And I started my exposure to Hamilton, sometime in the early '60s, by stopping my reading of Citizen every twenty pages or so, and thinking, "This is a true story!" By the end, I'd come to the conclusion that it was a novelization of some reality. And I still believe that underlying truth. And much the same thing can be said of LoF.