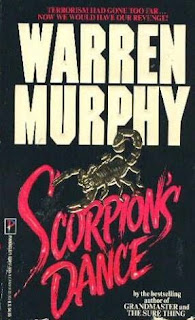 The past several months I have been re-discovering the work of Warren Murphy. I’ve read a handful of his novels, mostly thrillers from the 1980s, and I have been impressed. Impressed enough to have at least one of his novels in my to-be-read pile all the time. The current resident is the thriller Honor Among Thieves.

The title I just finished is Scorpion’s Dance. A novel that I enjoyed, but not for the reasons I thought I would enjoy it—the plot meandered a little, there wasn’t much action, but there was the trademark humor, and the characters where damn fun.

The United States and Russia form an elite joint-task force to counter an active terrorist organization called Tenterallah that is led by the illusive Abu Beka. As the novel opens Tenterallah is executing a successful ambush at Da Vinci Airport in Rome; seven passengers are killed and another 24 are injured.

The surviving terrorists are arrested, but quickly escape with the help of an outside party. At least that is how it seems until the escaped men are found dead hanging—in the hollowed husks of pigs—from a statue of the Madonna in the plaza in a small Italian village. The dead men have two notes attached that read:

“To the killers of babies and women: your turn in the pigskin is coming.”

“You Tenterallah butchers have run out of time. Abu Beka, you are next.”

The terrorists quickly become the victims of their own terror and the operation is controlled from the business offices of Mark Donovan. Mark is a wealthy businessman who, along with a Russian KGB officer named Petrov, plans to wipe Tenterallah off the map in a small and very well-funded operation. Unfortunately the pair has an unwitting mole on the fringe of their group and as they make the war personal for Abu Beka, Mr Beka brings the terror to their doorstep.

Scorpion’s Dance didn’t focus on the grass roots operation of Donovan and Petrov, but rather it was presented as a wide-angle perspective. Mr Murphy created a world for the two protagonists that included family, friends, lovers, and social events. It also included the occasional foray into the dark world of spies and law enforcement, but those scenes were rationed and used as climax pieces to unsettle and then pace the story; quite effectively too.

This quality made it very different from the usual thriller fare of the 1980s—it was published in 1990—when the Tom Clancy style thriller was king and it was a similar story, but Murphy cast his own unique storytelling on the entire operation. There was humor—the first few chapters in particular Murphy cast a humorous and telling light on journalism. When there is no news, they interview each other. And then do it again. The prose was smooth and very readable. The characters were witty and charming, and the bad guys were bad.


Scorpion’s Dance is an entertaining novel. It showcases Mr Murphy’s vast talent, and while it is not his best work, it is worth reading simply because it entertains in a smooth and easy style. It runs nearly 500 pages, but it doesn’t drag or bog and when it ended I was sorry to see it go.
Posted by Ben Boulden at 10:37 AM

I have a bunch of Warren Murphy's work the non-Destroyer variety that is in my TBR pile. Including the whole Trace detectiv series he wrote. Along with countless Destroyer adventures.

Bruce. The Trace and Digger novels are terrific. It is probably my favorite of the Warren Murphy canon. Although I have read a few of his thrillers from the mid- to late-1980s--SCORPION'S DANCE, THE HAND OF LAZARUS, THE CEILING OF HELL--and I have really enjoyed them.

Ben - I've read one of the Trace books, which deals with Trace on a movie set. Shades of the Remo Williams movie misstep come through loud and clear with some of the characters involved