VIETNAM: GROUND ZERO: THE FALL OF CAMP A-555 by Eric Helm 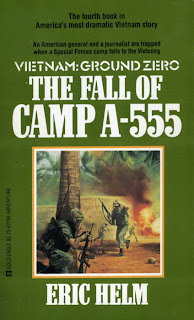 Mack Gerber is a captain in the US Army Green Berets in wartime Vietnam. He is also the commanding officer of Special Forces Camp A-555 near the Plain of Reeds. The year is 1965 and the novel opens with a general officer ordering Gerber to take his entire force into the field near the Cambodian border on a search and rescue mission.

A VIP was in a transport plane that crashed in the jungle. Gerber is uneasy about the orders, but he can’t find a contradicting order from within his chain of command so he takes his men—the Americans and most of the Tai strikers on the mission. The only problem is he left the wrong group at the base. When he returns he discovers the A-555 has been overran by the Viet Cong. The rest of the novel is Gerber’s attempts at retaking his base without getting the hostages—a general officer and a reporter—killed in the process.

I enjoyed these novels as a teenager and I have to admit that they haven’t held-up as well as I would like, but these books aren't bad. The action is well crafted and the men are also fleshed out fairly well in a men’s adventure sort of way.

The prose is smooth and easy to read. It is very much like the style made popular by Tom Clancy; at moments just a little more gritty and interesting. The plotlines are formulaic, but within the confines of the action and plot the authors do an excellent job of creating the visual and emotional elements of the war experience. The bravado and fear and male interaction are solidly developed and help lift the majority of these novels from the usual to something just a little better.

The Fall of Camp A-555 is the fourth title in the series and it fits perfectly with what the authors intended the series to be: quick, loads of action, and entertaining. The heroes are larger than life, but muted and balanced by the well-developed setting. The landscape and climate of Vietnam is well rendered and while the Vietnamese people are not developed beyond cardboard this title, and its place within the series, is an interesting and entertaining novel.

My favorite feature of these novels is the glossary at the back. It is a limited dictionary of slang used in Vietnam. The majority of the terms are seldom used in the novels, but the words and phrases are interesting. I can't vouch for the accuracy of the glossary, but still I like it. A few examples:

GO-TO-HELL RAG: Towel or any large cloth worn around the neck by grunts to absorb perspiration, clean their weapons and dry their hands.

Eric Helm is a pseudonym for two writers: Kevin Randle and Robert Cornett. I’ve read—where and when is a mystery to me—that the name Eric Helm is a tribute to Donald Hamilton’s Matt Helm series. Matt Helm’s code name was Eric, and the two obviously share the same last name.


Kevin Randle is a familiar name in the late-night radio arena and ufology. He is the co-writer, with Donald Schmitt, of the best-selling books The UFO Crash at Roswell and The Truth About the UFO Crash at Roswell. He is also a prolific fiction writer; he has written in several genres including action and science fiction.
Posted by Ben Boulden at 5:55 AM

i remember reading this series , i think i'll pick it up again ....thanks.