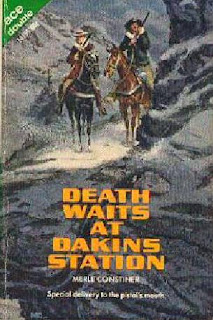 I discovered the work of Merle Constiner a few years ago, and while I haven’t read much outside the westerns he wrote for Ace in the 1960s and 70s, he has become one of my favorite pulp western writers.  I recently read his fine novel Death Waits at Dakins Station, and in my estimation it is the best novel he wrote for Ace.


Brady Willet is a young out of work cow puncher.  The novel opens with Willet standing in the rain outside the only saloon in a small Montana town.  He was paid off his last job in Wyoming, and he is making his way north to Canada for the winter.  He is approached by a man in a doe skin shirt who offers him $10 to take a simple message to a Mr Lustrell at Dakins Station.
The message: “Shaw can’t make it.”
It seems a simple enough task, and since Willet has only 35 cents to his name he readily agrees.  Unfortunately when he arrives at the long abandoned Dakins Station the task isn’t simple at all, and Brady’s involvement with Mr Lustrell causes him more than a few problems.  Lustrell has money trouble, and someone is trying to acquire his Box L ranch.  The interested party isn’t interested in “no” and Lustrell is worried for his own safety and that of his daughter.
Death Waits at Dakins Station is as much a mystery as a western.  It features a plot that keeps the reader guessing—and in my case mostly guessing wrong—and there is an unexpected, and very rewarding, climactic twist.  I was reminded of Ed Gorman’s westerns; particularly the deft weaving of a mystery plot into the trappings of a traditional western.  Not to mention the humor, which is the primary element that raises the novel above the ordinary—


“‘I can’t abide this room,’ said Lustrell.  ‘I wish I was in my bedroom.’
“‘I wish I was in the Lucky Dollar Poolroom in Yuma,’ said Willet. ‘The smell was cerveza, chili, and sweat’
“They ran out of talk.”
Death Waits at Dakins Station is a premium western.  It is short, running 110 pages in mass market, and it is one of the most skilfully executed westerns I’ve read.  The plot is perfectly designed to satisfy both a western and a mystery.  The prose is stark, dry, and instilled with humor.  There is the requisite action.  Willet is bushwacked, beaten, and even chain whipped.  And at its best, it displays nearly all of these attributes at once—


“This one, the man in the hairy chaps, had his riflebutt almost to his armpit to draw his bead when Willet blasted him.  He shot twice.  Hip-shooting riflemen didn’t worry Willet too much, bead-drawing riflemen sure as hell did.”
The characters all perfectly match the story, but Mr Constiner adds a quirky oddness to most, including a foul smelling hide-buyer named Meacham, who, when Willet meets him, explains in humorous detail how to recognize a good hide.  This is a title you should find and read, with no worry of regret.

Death Wait at Dakins Station was published as Ace Double No. 14195 in 1970 with Ransome’s Debt by Kyle Hollingshead.
Posted by Ben Boulden at 9:05 AM