SAD WIND FROM THE SEA by Harry Patterson (Jack Higgins) 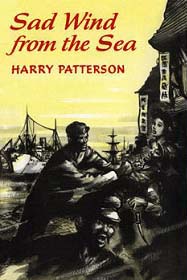 Sad Wind from the Sea is the first novel published by Harry Patterson.  It was released as a hardcover by John Long in 1959.  It was a difficult title to find in the United States until it was recently released as a print on demand trade paperback and ebook by Open Road Integrated Media.


Sad Wind is a familiar story to readers of Jack Higgins.  It has a similar plot to both the The Khufra Run, and The Keys of Hell, but while it is familiar, it is a very enjoyable read.  Mark Hagen is a fallen American naval officer who, with his boat Hurrier, makes a living smuggling, gun running, and illegally pearling.  When the novel opens Hagen is on the Portuguese Island of Macao; Hurrier was impounded by customs, and Hagen is down to his last few petakas without any way to get his boat back, or earn a living.


Hagen’s prospects change when he rescues a beautiful Indo-Chinese (think Vietnamese) girl from two attackers in a rough part of Macao.  The girl’s name is Rose Graham, and she tells Hagen she was meeting a friend about retrieving $250,000 of sunken gold when she was attacked.  Her father was smuggling the gold out of North Vietnam and his boat sank in the Kwai marshes.  Hagen quickly devises a plan to retrieve the gold, but it all hinges on getting is boat out impound, and finding a willing financier.

Sad Wind has all of the elements of a solid 1950s adventure novel.  It includes the requisite communist plot; in this case a Russian named Kossoff who wants the gold for himself, and his Chinese helpers.  There is an array of underworld characters including Charlie Beale, owner of a casino, and Clara Boydell, madam of the best “house” in Macao.  The plot is intricate, and the prose is pure Higgins—stark, tight, smooth, and surprisingly atmospheric.
“When Hagen emerged from the gambling casino at the back of Charle Beale’s café he was drunk.  He heard the door click into place behind him and for a moment he stood swaying as the cold night air cut into his lungs.”
There are also some really neat cultural references from the 1950s.  Hagen hands out a Benzedrine—an amphetamine better known as a bennie—to Rose and says, “[T]hey’re harmless.”  When they are deciding where to run with the gold Hagen says, “Not England—killed by taxes these days,” which foreshadows Mr Patterson’s hasty move to the Isle of Jersey when The Eagle Has Landed pushed his income into the millions.  There is also what appears to be an error in the text when Mark Hagen refers to Ireland as his childhood home, which is rather odd for an American—


“For a moment he shivered as he remembered stories he had heard as a child of fairy pools back home in Ireland…”
Sad Wind from the Sea is Harry Patterson’s earliest novel, but it is really very good.  And while it is familiar, and Mr Patterson does have a tendency to repeat himself, the familiarity didn’t take anything from the novel or my enjoyment of the story.  It is similar to some of the early Gold Medal adventure titles; specifically Wade Miller’s Devil May Care.  If you enjoy the old style adventure novels, or just Jack Higgins, you will have a good time with this title.