THE HEIGHTS OF ZERVOS by Colin Forbes 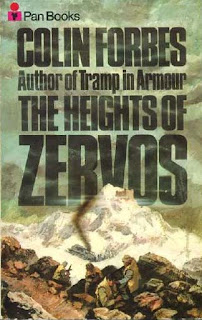 Alistair MacLean has been a staple of my reading since middle school, and I have been a fan of his, and the adventure suspense genre he wrote, ever since.  I especially enjoy the work of the genre’s top writers: Alistair MacLean, Desmond Bagley, Gavin Lyall, and Jack Higgins.  While I think of those four writers as the genre’s first tier, there are a handful of writers who wrote a solid adventure story, but weren’t quite consistent enough to take the stage with the best.  One of those writers is Colin Forbes.


Mr Forbes, which is a pseudonym for Raymond Harold Sawkins, wrote more than 40 novels (most fit quite comfortably in the adventure suspense genre) and many, especially his earlier novels, are really very good.  I recently read the second novel Mr Sawkins published as by Colin Forbes, and really had a good time with it.  The title: The Heights of Zervos.
Macomber is a Scotsman who is working for British Intelligence in Rumania in 1941.  The novel opens in the early hours of a cold April morning.  Macomber is atop an oil tanker rail car, a German patrol is searching the rail yard, and the bomb he planted beneath the oil wagon has less than 10 minutes to detonation.  If Macomber moves he will be gun downed by the Germans and if he stays put he will be blown into pieces by his own bomb.


The Heights of Zervos opens with a bang, and while there is never much doubt of the story’s outcome, it maintains the suspense throughout, and, amazingly, the roll out of the story is surprising.  Macomber moves from the rail yard to a ferry between Turkey and Greece, and finally to Mount Zervos, and he does it all while dodging Germans and their bullets, impersonating an Abwehr officer, and racing a storm up Mount Zervos.
The power of the story is in its straight ahead mentality.  It moves forward with a strong pace, and the plot twists enough to keep it interesting.  Mr Forbes’ skill is in crafting a tale, which is expertly plotted with a setting developed enough to make the reader believe the action:


“It was the third night of April and Rumania was still gripped by winter, still showed no inkling of spring on the way, still lay numbed under the icy wind which flowed from the east, from the Russain steppes and Siberia beyond.”
The elements are as much an antagonist as are the German soldiers—the snow and ice as Macomber approaches the summit of Mount Zervos represent more risk to him than the Germans.  There are a handful of scenes that actually caused me discomfort.  In one a British soldier is bound, feet and hands, in a dark cabin on the ferry between Turkey and Zervos, which caused an unsettling claustrophobia.


The Heights of Zervos is something better than average in the genre.  It certainly has weaknesses—Macomber is a little too super and everything seems to work out a little too well—but the action and pace, setting and description, more than cover its flaws.  If you enjoy the genre you won’t mind this one at all.
Posted by Ben Boulden at 6:56 PM

I agree. Forbes wasn't quite as good as the ones you mention as being in the top rank, but the books I've read are fun. I think I've read only a couple, however.