THE THIRD ILLUSION by Harrison Arnston 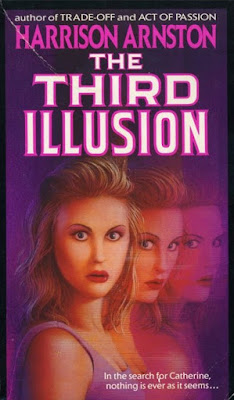 Harrison Arnston’s The Third Illusion, published by Harper as a paperback original in 1993, is a nicely played hybrid of the private eye and thriller genres with a tricky plot that Alfred Hitchcock would have found intriguing. It is Mr. Arnston’s eighth novel, after the legal thriller Trade-Off (1992), and his second to last published novel, preceding The Venus Diaries (1994).
David Baxter, a former CIA operative, is a hunted man. A Palestinian terrorist group has sentenced him to death for thwarting an attack and killing its leader. With the help of the Agency, David faked his own death, changed his name to Jack Slade, and lives a secluded life in a California mountain town. When a wealthy and politically ambitious businessman, who knows David’s real identity, lures him out of hiding with a hard luck story about a missing daughter, David’s carefully orchestrated life unravels.


The Third Illusion is what a thriller should be: entertaining, complex and fun. Its first person narration is smooth and provides the reader with an unobstructed view of both the action and David Baxter. Its plotting and pacing are pitch-perfect, and while the book runs 452 pages in mass market, there is plenty of story from the first page to the last. The climactic twist is achieved with what must have been a cutting edge technology in the early-1990s, and still feels a little science fiction, that stretches belief, but in Arnston’s expert hands this reader didn’t much care.
Posted by Ben Boulden at 10:30 AM