Desperado Doublecross, by Tom West / The Plunderers, by Norman Daniels was published as a double book by Ace in 1970 (14265). The cover art for both titles is pure Western pulp bliss; flashy, vivid with more than a little implied action and violence. The artist(s): Unknown (to me at least) 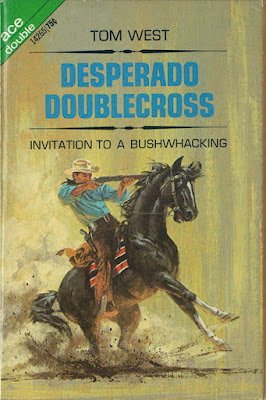 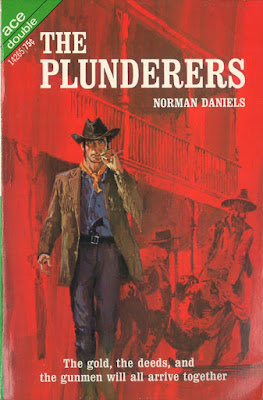 The first sentence from Desperado Doublecross:
“Bill Mackay felt sorrier than a sick calf.”
The first sentence from The Plunderers:
“The street had quickly cleared of people and, except for the loudmouthed, drunken, highly dangerous man who walked down the middle of the of the road, the little town looked abandoned.”
Posted by Ben Boulden at 7:00 AM

I like a good Western. Correction: I enjoy all Westerns.

Norman Daniels didn't write many Westerns, although he wrote plenty of everything else. I have this one but haven't read it yet.