A MAMMOTH MURDER by Bill Crider 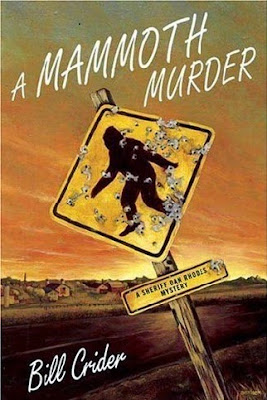 Bud Turley, called Bud Squirrelly by those who thought he had a lot of peculiar ideas, put the gigantic tooth down on Sheriff Dan Rhodes’s desk and said, ‘I want you to take custody of this tooth, Sheriff’
With that opening, the very essence of both A Mammoth Murder and Bill Crider’s character Sheriff Dan Rhodes is laid bare: humorous, witty and entertaining. A Mammoth Murder was originally published in 2006 by St. Martin’s Press, and it is the 13th mystery to feature Blacklin County Sheriff Dan Rhodes.
Bud Turley found the tooth in Blacklin County’s version of the Bermuda Triangle. A patch of dark timbered country called “Big Woods,” which is home to a mean-spirited pack of wild hogs, rattle snakes, copperheads, cottonmouths, and rumors of Bigfoot. Turley is certain the tooth he found belongs to the latter and he wants Sheriff Rhodes to protect it until an expert—a local community college teacher—can look at it the next day.
A report of a dead body in Big Woods interrupts Rhodes’s enjoyment of the tooth. The dead man is Bud Turley’s best (and only) friend Larry Colley whose body is discovered alarmingly close to where Bigfoot’s tooth was found. The death toll rises when an elderly shopkeeper is found dead in her store. Rhodes is certain the murders are connected, but he is continually bothered by a feeling of missing something both important and obvious.
A Mammoth Murder is a charming, sly, and entertaining novel. The mystery is quirky and sincere. The dialogue is sharp and genuinely funny; most of it coming from the mouths of Rhodes’s dispatcher and jailer, Hack and Lawton. The two jab at each ferociously and enjoy, more than just a little, playing with Rhodes’s patience.
The story is bolstered by a colorful cast—Bigfoot hunters, amateur crime writers, a local newspaper reporter better at her job than Rhodes would like, and Rhodes’s wife Ivy, who put him on a low fat diet and knows nothing about his daily Blizzard from Dairy Queen. Not to mention Hack and Lawton.
The mystery is great, too. There are enough red herrings to keep the reader interested, and just enough action to make it exciting. Even better, there is something of a cold case thrown in—a young boy was killed in Big Woods ten years earlier, and Sheriff Rhodes is certain it is connected with the two recent killings—and the resolution is very satisfying.

I need to read me some more Dan Rhodes. This one looks like a hoot. Love that cover!