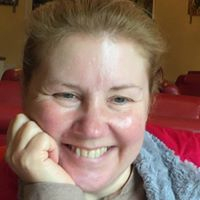 Jo Walpole published her first novel in 2005—a well-received Western romance she would “prefer to keep…in the past”—and since then Jo has written another eight novels and a short story collection. Her recent work has been in the Western genre, both traditional—“standard [and] non-offensive”—written as by Terry James, and a more violent and graphic variety with her tough-as-nails Maggie O’Bannen series, written as by Joe Slade.


Jo’s work has been well-received by critics and readers alike. The first Maggie O’Bannen novel, Days of Evil, was called “absorbing” with “smooth writing, real characters, and a great story” by novelist Paul Bishop. Her writing has also been hailed as “fun”, “fast moving, hard hitting”, and “unputdownable”.
Jo was kind enough to take a break from her writing and answer a few questions. The questions are italicized, and as always, the answers are so much more important.
What’s your latest novel?
It’s called Wanted - Dead and is the second in the Maggie O’Bannen series, which I write as Joe Slade for Piccadilly Publishing. It’s available now. The first book was debuted in November 2017 and introduced the reader to Maggie and her band of misfits. It was hard hitting and graphic in its violence, a diversion for me from my other alter ego Terry James who writes more standard, non-offensive westerns. However, the Maggie O’Bannen series is very organic in that Maggie and her relationships with those friends grows and changes to create a stronger story so that in the second book means the graphic descriptions of violence, to quote Western Fiction Review, have been toned down a little. However, there is still plenty of hard hitting bloody action, which will hopefully satisfy readers along with an interesting plot. 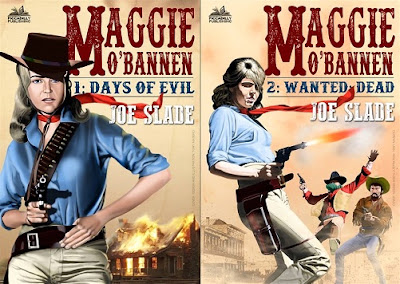 I’m always intrigued by the origin of pseudonyms used by writers. Do your pseudonyms—Terry James and Joe Slade—have any special meaning to you?
Terry James is a nod to my husband. Joe Slade happened because I wanted to separate my two writing identities, being that the Maggie O’Bannen books are much grittier than anything I’ve written before. Joe has always been my preferred short version of Joanne and Slade was completely random.
Without breaking any of your personal taboos, would you give us an idea of what you’re working on now?
I’m now working on book 3 in the Maggie O’Bannen series. I love writing the characters and, as I mentioned above, their experiences and circumstances are shaping them, as would happen in life, so I never truly know what’s in store except for the outline of the main plot. It certainly makes life interesting for me.
What was your first published novel?
Wow, that was a while ago, back in 2005. I published a romance western with Whiskey Creek Press called Raven Dove (very arty). It was a story I’d always wanted to write and I was lucky enough to get it accepted on its first outing. When I look back on it now, it’s very wordy and emotional, something I have tried hard to limit as I have become a more experienced writer and found my genre. It was for a different market and it was well received at the time but I’d prefer to keep it in the past now.
When did you first realize you wanted to be a writer?
I always wanted to be a writer, even if only in the back of my mind. Until I was about 13 years old, I was focused on becoming a journalist but my circumstances and the resources available to me at that time didn’t fit. I wrote fiction for friends and family until I was about sixteen at which time I met my husband and got distracted. Also, I decided at that time that I didn’t have enough life experience to write what I wanted to, which was bodice rippers. I didn’t start writing anything again until I was thirty-three and that took the form of short stories, poems, haikus, absolutely anything. It was when I stopped working full time and also joined a supportive romance forum that I really dug in. 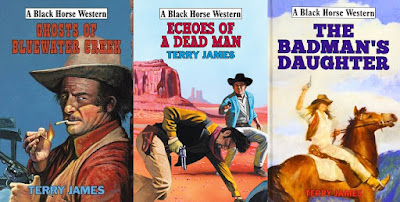 How do you go about writing?
I think about it a lot. I can’t put two words together until I have a full technicolour picture of the main story elements in my mind. Once that’s set, I sit and write as the mood takes me. Sometimes I write big chunks and other times I write a few sentences. It can be days or weeks between sessions. That I actually finish a book at all is a miracle. I don’t have a specific time for writing but I do prefer first thing in the morning before the day starts to drain my creativity.
Do you have any specific pleasures, or displeasures, that come from writing?
I love living vicariously through my characters. I hate not being disciplined about the process. However, I feel that if it becomes something I attach rules and timeframes to then the pleasure I get from writing and creating will be spoiled. I’m very lucky to have found a publisher in Piccadilly Publishing who are happy to support me in that.
Are there any writers that inspired—or continue to inspire—your own writing?
Louis L’Amour, obviously. I grew up reading his books which were always available at the library. Early on I was very influenced by Rosemary Rogers and Kathleen Woodiwiss, both of whom write historical romance novels. The attraction for me there was the depth of characterisation as well as a full story. Thinking about the western genre, I’d include TT Flynn definitely and Ed Gorman, who I read a lot when I wanted to start writing westerns seriously. More recently, I have been influenced by the writings of John Benteen (Sundance and Fargo), Neil Hunter, Ben Bridges and Brent Towns. Brent will laugh at that but I find him very inspirational because I sometimes find it tricky to move characters around locationally and he has a natural way of propelling a story along at a fast pace without neglecting the character, the action or the background.
As a writer and reader, what draws you to the Western genre?
I like the scope of possibilities the Old West offers. It’s a good escape from modern life. As long I get a good fast paced read with no unnecessary padding, a believable plot and characters I can root for, I’m happy. 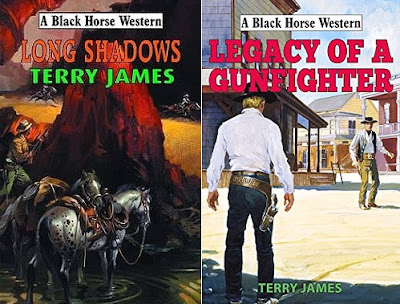 If you could write anything, without commercial considerations, what would it be?
Happy to say, I already am. The Maggie O’Bannen series is the fulfilment of a desire to get down and dirty and write outside my comfort zone. Luckily for me, Ben Bridges and Mike Stotter of Piccadilly Publishing were willing to take a chance that I could pull it off. So far, I don’t think they’ve been disappointed.
If you were stranded on an island and you had only one book, what would it be?
Easy. It would be Louis L’Amour’s To Tame A Land. I love everything about it. It’s the book I’d like to write. In fact, I’d like to step inside the pages and live it.
If you were allowed only to recommend one of your own novels, or stories, which one would you want people to read?

That depends. If it’s something mainstream (like a John Wayne movie) they’re after, then I’d recommend The Badman’s Daughter under my Terry James pseudonym. If it’s something with teeth then definitely Maggie O’Bannen book 1 Days Of Evil by Joe Slade. I’d hope that either would be a good read.

Great interview with a great subject