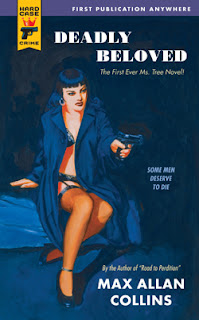 Good news on the Hard Case Crime front--they have just announced and released the cover art for their newest title--Deadly Beloved by Max Allan Collins. Deadly Beloved is an original title; something Hard Case should do more of, and it is different from their usual fare, in that the protagonist is a woman. The book sounds great, and the artwork is great. (see right)
Collins is the author of two previous HCC titles: Two for the Money and The Last Quarry. Two for the Money is a reprint of two early titles--Bait Money and Blood Money--featuring professional criminal Nolan. Nolan is Collins's homage to Richard Stark's Parker, and don't tell anyone, but I actually prefer Nolan to Parker. Wow. I feel like I just committed an act of heresy.
Two for the Money is my second or third favorite book HCC has produced, and I hope Deadly Beloved is pretty damn good, too. And speaking of Nolan, I figure it's about time HCC released a couple more--maybe publish them like the old Ace Doubles, back to back.
Cool, no?
Unfortunately Deadly Beloved isn't scheduled for release until December, 2007.
Go Here to visit Deadly Beloved's promotion site.
Posted by Ben Boulden at 3:42 PM