A little over a year ago I reviewed the novel Threat Case by J.C. Pollock—a writer I devoured as a teenager in the early-1990s—and while I was re-reading Threat Case I did a little research and found a hotly contested pseudonym that possibly belonged to Pollock. The pseudonym is James Elliott and the majority of information around the Internet suggested it belonged to the writer John Case—which is the pseudonym of husband and wife team Carolyn and Jim Hougan. They have written several successful novels over the past decade including The Genesis Code and The First Horseman. Unfortunately I’ve never read any of them, so I can only assume they write a tight and gripping thriller. 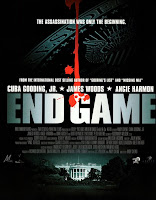 Now back to Pollock. I’ve been exchanging emails with Mr Pollock for a few weeks and he confirmed the James Elliott novels are his. He wrote three novels using the Elliott nom de plume from 1996 to 2000. The titles, Cold Cold Heart (1996), Nowhere to Hide (1997), and Endgame (2000). He has since turned his attention to Hollywood and screenwriting. He wrote the screenplay for the straight to DVD film End Game—no relationship with his novel of the same title—that starred Cuba Gooding, Jr and James Woods, and was directed by Andy Cheng. Mr Pollock wasn’t impressed with the finished product and warns against making an effort to find it. He is currently working on a New Line Cinema project titled The Venus Fixer—a project he says, “I am having a much more pleasant experience with [than End Game].”

I have found only one of the James Elliott novels so far, the Pinnacle Books edition of Cold Cold Heart, and I haven’t read it yet. It’s on my stack of “to-be-read” books and I need to move it up a little. Heck, maybe tonight. And I can’t wait to see what his most recent film project turns out to be.

Here is a complete list of novels written by J.C. Pollock:

As by James Elliott

Click Here to read the first J.C. Pollock Update. (This has proven to be one of the most popular posts here at Gravetapping. It gets several hits a day and even though it was posted more than a year ago I still get quite a bit of email about it.)
Posted by Ben Boulden at 2:19 PM

My son has to read a book written by an American Author. Can anyone tell me if J C Pollock is an American author, I searched everywhere and can't find out.

J.C. Pollock is absolutely an American author. I know he lived for several years in Aspen, Colorado and I think he lives in Virigina now. His biography is a little elusive, but he was a Vietnam-era member of the military / intelligence service. His work is very entertaining and I recommend anything he has written.

I'm so glad I found your site. I have read both Cold Cold Heart and Nowhere to Hide by James Elliott, both many times. I have to say he is one of my most favorite authors, and if it's true he's really J C Pollock, I'm pleased to learn that. I read Cold Cold Heart first, then stumbled upon Nowhere to Hide a year later in my local bookstore....it's actually a signed copy (hardcover). Yes, I live in central VA (Go Hoo's). I asked the sale's clerk about the author but she wouldn't tell me who it really was, said he wished to stay anonymous. Hate to admit it but I've never read any of J C Pollock's books, but will definitely be making a trip to the bookstore this weekend. Since John Grisham lives close by I really thought he was the author of both books, guess I was wrong about that. Thank you for sharing what you know.

Funny that I found your site today as I, too, was a HUGE J.C. Pollock fan.

Glad to see he's still writing and that's he's moving to screenplays. Do you know who reps him these days?

Let me say that I am a HUGE J.C. Pollock fan. I have every book he has written under his own name, I have read them all over, no less than every two years, and that starting in 1983 with his Mission M.I.A. I give him alot of credit for me joining the Army back in the 1980's. If you haven't read him, it is well worth the time. i reread him as I don't find many writers like him(Leonard B. Scott is another great Author, and was the Commanding Officer of airborne school, when I went through in '84). I was always disappointed that he seemed to disappear after Goerring's List, as that was a darn good book. To know he went to a psuedonym, means I must go to the bookstore this week, and order them. Yay, J.C., for not letting me down. Dan Shively II

And I thought I was alone in my intense fascination with JC pollock novels. I too am going to find those other books.

Anything new on J. C. Pollock? Does he give any reason for being so elusive?

Mission: MIA was the first current full length novel I remember reading. ( Besides older some-what classics like ERB's Tarzan, REH's Conan, or Lamour Westerns.) And it has always stuck with me. I also read Centrifuge and Payback. Has he given-up writing novels under the Pollock name?

Wondering if there is any update on the screenplay for "The Venus Fixers"? I've been a fan of JC Pollock since I first read "Mission MIA" and when I showed my husband his jacket photo, he remembered Pollock from his US Army service during the Viernam era.

No news on The Venus Fixers. IMDB shows it as "in development" and, unfortunately with the new IMDB format, there isn't any information beyond that.

Jan 09,2011 Hello My name is Mike Kelly I personally know Jim he did research in Brooklyn ny in order to complete his book. I ask the owner of this blog if you would please relay an e-mail to Mr. Pollack and discribe who I am and I'm sure he will respond. I went thru a rough devorce and lost critical documents and numbers.I was a young police officer working in Flatbush Brooklyn and Jim toured with me. Please email me back dumaflachi1@aol.com. let me know itwouldbegreatly appreaciated. I have a lot of catching up to do with him. Thank You Mike Kelly

Hi. I just found out about J.C.Pollock because I read that his book CROSSFIRE was a big influence on the videogame METAL GEAR directed by Hideo Kojima. I just ordered that said book from amazon and can't wait to get to read it. I have no idea what to expect from this book and I haven't read that many war books, I mainly read science fiction and thrillers.

hi, can someone please give me a way to contact J C Pollock? My father is actually a character in threat case and i would like to beable to contact him

Jim is a friend of mine we had similar backgrounds. I sold him a showdog many years ago but have since lost touch with him and Barrie.The phone number I have is no longer valid.The last place he lived was in Charlottesville Va.Any info on how to reach him would be greatfully appreciated
John McCartney jxm815@gmail.com

John, unfortunately the email address I had for him is no longer in service. It's amazing how many people, from publishers to friends to academics, have reached out to me looking for contact information.

If anybody gets a chance to talk to JC Pollock/James Elliot, please ask him to have his publishers put his books in digital format. I'm switching to kindles because it's easier to carry the books and because my eyes aren't what they used to be.

I am a huge fan of J.C. Pollock, I read 7 of his books and bumped into him in NYC one day by accident. I recognized him from the book cover and started a conversation with him. Met him several times after that in NYC, including the time he brought me a signed copy of Threat Case! Awesome author and great guy!! The last time I saw him he was researching Cold Cold Heart in NYC. Its been quite a while.