THE CEILING OF HELL by Warren Murphy 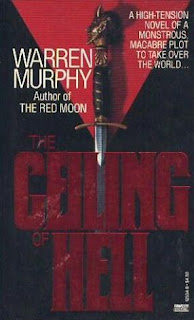 I’m a sucker for three things. The first is a cleverly plotted 1980s thriller. The second is a private eye novel. The third is any story that features shrewdly evil Nazis. It’s not often to find all three packaged neatly together in one story, but that’s exactly what Warren Murphy did with his 1984 Shamus-winning novel The Ceiling of Hell.

Steve Hooks is a former Secret Service agent and presidential bodyguard. He was wounded in the service and his wife was put in a coma. He left the service to start his own private security agency and while it looked good on paper his client list is shockingly short, so when a former co-worker—Robert Pardin—refers a German academic to Hooks as a bodyguard he can’t turn it down. The German’s name is Professor Edward Kohl and he makes his living hashing up bad memories about the Third Reich. And there are more than a few groups that would like to silence his voice.

The job doesn’t go as planned. Professor Kohl is killed in his hotel room and Hooks is knocked cold. Before Kohl dies he asks Hooks to help him find a German girl who reportedly immigrated to the United States at the end of the war. The professor doesn’t have anything except her name: Anna Mueller. Hooks doesn’t think much of it until Pardin contacts him and asks him to—unofficially—go to Germany to give condolences to Kohl’s family and investigate the German side of professor’s murder.

It doesn’t take long for Hooks to realize he’s into something much larger than he first thought. He is kidnapped, intimidated and basically wants the hell out. Unfortunately the trouble follows him back home and what he discovers is more than a little unsettling. In fact, it very well might be the beginning of the Fourth Reich in the United States.
The Ceiling of Hell is an interesting mix. It is a private eye novel, but it isn’t the standard fare. The protagonist doesn’t fit the hardboiled mold and the story line is a mixture of a sleek thriller, an inventive adventure tale, and a straight-up mystery. There is plenty of action, and more than a few twists.

The protagonist is likable and more than capable. The prose is swift and clean. The plot is perfectly played. And just about everything else about the story is clean, smooth and entertaining. The real story is the mixture of genre—even related genre—into the novel. It gives The Ceiling of Hell a certain sparkle and originality that it otherwise wouldn’t have. It takes the novel from the entertainingly escapist fare to the next level. It showcases Mr. Murphy’s talent and skill as well as his inventive and subtle humor.


The Ceiling of Hell is a real treat. It is been out-of-print for twenty or more years, but it is very much worth scouring a few used bookshops to find. It was originally printed in 1984 by Fawcett Gold Medal.
Posted by Ben Boulden at 9:40 AM