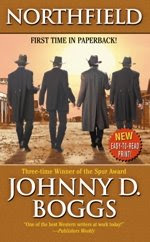 The James-Younger gang has been done too many times in modern Western fiction, but Johnny D. Boggs has found a fresh perspective in his novel Northfield. It chronicles the events of the Northfield, Minnesota raid that claimed the lives of two gang members and saw all three of the Younger brothers jailed. It is the story of the downfall of the gang.

It is written in multiple perspectives; the opening and closing scenes are in the voice of Cole Younger, and each chapter between is in the voice of an eyewitness to the events. The narrators include all of the gang members—Frank and Jesse James, Bill Stiles, Clell Miller, Charlie Pitts and Jim, Bob and Cole Younger—as well as a large assortment of witnesses including a prostitute, the former Governor of Mississippi Adelbert Ames, an innkeeper and the boy who first saw the Younger brothers limping out of Minnesota. The style is noticeably different for each narrator; at times it is subtle with stronger and different word choices and other times it is a hard and distinct shift from literate to less literate and even near illiterate.

The story sprawls across the pages with a vivid recreation of the events. Johnny D. Boggs does not make a moral judgment on the players. The gang is portrayed with an astonishingly effective blend of villain and common man. They are not necessarily good men, but neither are they bad men. The Youngers, specifically Cole, are humanized and made more real than I have experienced them before in film or literature. The James brothers are viewed less favorably, especially Jesse, but even they are viewed as whole people and not cardboard folk heroes or black-hearted villains. The story is familiar—I know how it ends before I read the first page—but Boggs style and eloquence make it interesting and more than readable.

The scenes narrated by Cole Younger have the most power. The style is sharp, literate, and at times, tough as hell:

“Seven minutes…seems like seven lifetimes.
“‘For God’s sake, boys, hurry up! They’re shooting us all to pieces!’”

It is, however, the separation of viewpoint that gives the narrative its power. It is a piece that rings true; perhaps someone who knows more about the story and subject can find fault, but to my eyes it is damn close to the correct version. The characters are alive and the story is stirring and vivid.
Northfield is an excellent novel that should get more attention than it has. It is not a shoot-‘em-up Western, but rather a contemplative and fine example of how good the modern Western novel can be and often is.
Posted by Ben Boulden at 9:32 AM