THE DARKER SIDE by Cody McFadyen 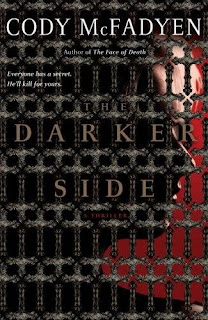 The Darker Side is different than the usual novel I read. It is a serial killer-novel—a genre that I jump into only occasionally—that focuses heavily on atmosphere and a dark philosophical interrogation of humanity and its vices.

Smoky Barrett is an FBI manhunter who has a very personal experience with death. Her family was killed as she helplessly watched. The experience scarred her, both physically and emotionally. This closeness with death, murder and loss is the reason Smoky is chosen to investigate the murder of a transsexual. The victim is the child of a powerful senator; a senator who comes from a socially conservative state and could lose everything if the investigation turns out wrong.

The victim was murdered on a commercial airliner. No one witnessed it, or even knew it happened until a flight attendant tried to wake her after the jetliner landed. It doesn’t take long for Smoky to realize it is the work of a serial-killer, and she and her team try to walk the tightrope between political pressure, real-world agonies, and the job at hand.

I have mixed feelings about The Darker Side. The atmosphere is rich and dark—it (the atmosphere) reminded me of the Chris Carter television series “Millennium”—but the crime seemed forced and, at times, unbelievable. It, at times, felt like a locked-door mystery for the “CSI” generation.

The protagonist and narrator—Smoky Barrett—made for a likable character and the narrative was smoothly cool in a soft dream-like style:

“There are trees everywhere, young and old. Their sheer volume tells me they are cherished by this city, and I can see why. Fall is an actual season in Alexandria, Virginia. The leaves are on the turn and, well—it’s pretty spectacular.”

The description, at times, is overwhelming. The author uses multiple pages to introduce Smoky’s team, and there is a scene towards the beginning of the novel where a major players reveals he is gay that is overly traumatic and downright unbelievable. But as the story unraveled I found that the excesses bothered me less and less, and that I liked Smoky Barrett more and more.

The Darker Side's true power is its ideas—guilt, sin, absolution and redemption. And in the end it is the ideas, the atmosphere, and the protagonist that carry the novel to its conclusion.
Posted by Ben Boulden at 7:15 AM

I'm not quite finished with this one but I enjoyed the first two books in the series and recommend both. This book sorta skimps on the back stories of Smoky's team. If you'd read the earlier books, which I'll admit shouldn't be necessary in a series, you wouldn't have been displeased at the way a team member announced he was gay. That's just the way that particular character would have done it.

Michael. This review is one of the more difficult I've written. I wrote it a week or more ago and sat on it until this morning. I enjoyed it, but there were a few moments--the revalation scene specifically--that bothered me and jolted me out of the "willful suspension of disbelief" for a moment, which then created more suspicions and doubts about the story. Alas...a cycle.

Anyway, my point: I enjoyed THE DARKER SIDE, especially the atmosphere McFadyen created and the protagonist. She was tough without being annoying about it. I actually enjoyed it enough that I may go back and find the first novel and try it out. Or maybe the second. Heck, I'll do the series backwards.

Thanks for the comment. And reading the blog and review.