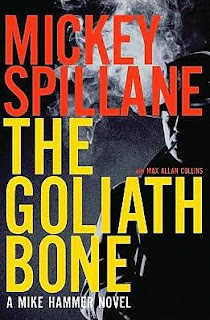 I bumped into a new Mike Hammer novel in a local bookstore this past weekend. It is a collaborative effort between the late-Mickey Spillane and Max Allan Collins. Collins, or so I think, finished a manuscript left by Spillane at his death. This is the second Spillane novel Max Allan Collins has finished since his death—the first was Dead Street, a Hard Case Crime title that I haven’t read—and I don’t think it is the last. I’ve heard there are at least two more Hammer novels scheduled.

The two also collaborated on a recent short story—“There’s a Killer Loose!”—in the August issue of Ellery Queen Mystery Magazine. It was really pretty good. It had the flavor of a 1950s hardboiled story and a plot that could have been pulled from an old radio mystery. I really enjoyed it.

The description of The Goliath Bone:

The bestselling American mystery writer of all time brings back his world-famous PI Mike Hammer for his biggest—and most dangerous—case. In the midst of a Manhattan snowstorm, Hammer halts the violent robbery of a pair of college sweethearts who have stumbled onto a remarkable archaeological find in the Valley of Elah: the perfectly preserved femur of what may have been the biblical giant Goliath. Hammer postpones his marriage to his faithful girl Friday, Velda, to fight a foe deadlier than the mobsters and KGB agents of his past—Islamic terrorists and Israeli extremists bent upon recovering the relic for their own agendas.

A week before his death, Mickey Spillane entrusted a substantial portion of this manuscript and extensive notes to his frequent collaborator, Max Allan Collins, to complete. The result is a thriller as classic as Spillane’s own I, the Jury, as compelling as Collins’s Road to Perdition, and as contemporary as The Da Vinci Code.

P.S. Hopefully it's significantly better than The Da Vinci Code.
Posted by Ben Boulden at 3:59 PM